ITM Power is not a huge company. A market cap of around £110 million would result from the share price of 33.50p on Friday 27 April. Yet the company is in the forefront of innovation in the use of hydrogen generated from renewable energy to reduce carbon emissions, both in the transport sector and in the heating sector. Recent weeks have seen what seems to be a burst of news released by the company about its activities.

It is often assumed that the future for transport is electric and electric vehicles. Specialists tell us that a large network of refuelling stations will not be what is needed. What will be crucial is education: the general public will need to understand that electric cars will usher in a whole new refuelling relationship. For electric refuelling takes time, so most refuelling will take place at home (60 per cent), or at the workplace (30 per cent), or even at journey’s end (7 per cent) rather than en route (3 per cent).

But this is to assume that electricity will be the fuel for the future. ITM for one, and Toyota/Renault for another, see a different future based on fuel cell vehicles refuelled with hydrogen in a time-frame comparable with that of a traditional combustion engine vehicle. For safety reasons the widespread use of hydrogen does indeed imply an effective refuelling network. That is why on 26 March 2018 ITM announced that it had received a grant of some £4.3 million from the UK Department for Transport,  part of an overall £8.8 million awarded to a consortium also including Shell, Toyota, Honda and Hyundai. The aim was to improve access to an expanded network of hydrogen refuelling stations so as to support the continued roll out of hydrogen fuel-cell electric vehicles.

Accordingly, ITM Power will use their grant to build four new refuelling facilities in Swindon, Gatwick and two in Birmingham, while also upgrading their five existing stations. Some of these are in specialised locations like the National Physical Laboratory in Teddington, or the Centre for Engineering and Manufacturing Excellence in Rainham. But there is a commercial station at the busy Cobham intersection on the M25 and on 27 March 2018 it was widely reported that a hydrogen refuelling facility had been opened on the forecourt of the Shell station at Beaconsfield on the M40. 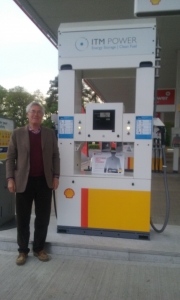 The ITM Power refuelling station in Beaconsfield with an eager customer

The other half of this equation is of course a car capable of being powered, and refuelled, by hydrogen. Here, too, there has been some progress. It is already possible to buy a hydrogen car- the Toyota Mirai, was launched in the autumn of 2015 as a zero-emission vehicle. With a 5kg fuel tank capacity, it has a range of some 300 miles. Admittedly, only a handful of cars have been sold to date, but 10 April 2018 saw the announcement that ITM had signed a contract to supply hydrogen to the Metropolitan Police Service, for their 11 newly ordered Toyota Mirai, which are to be used for rapid response. The acquisition of this fleet is a first step towards the Mets’ ambitious target of procuring 550 zero-emission or ultra-low emission vehicles by 2020. More generally, Toyota is on record as seeing the emergency services, taxi fleets and other return to base vehicle operators as important early adopters of hydrogen technology, to help pave the way for more widespread adoption of Fuel Cell Electric Vehicles (FCEV).

At the same time ITM has also been active in the power to gas sector in North America. On 29 March, the company announced that the Government of British Columbia has awarded it a grant for a feasibility study to evaluate the large scale production and use of renewable hydrogen in British Columbia and its export to Japan and California. On 5April, another grant was announced from the Massachusetts Clean Energy Center (sic!) to assess the potential for Power to Gas (P2G) energy storage and hydrogen fuel for the Massachusetts region. The study, to be carried out in collaboration with a local gas and electricity utility, will determine the technical and economic feasibility for P2G and hydrogen fuel derived from renewable energy sources.