The DBEIS announces a new scheme to support heat networks

Heating has long been recognised as the most difficult area to decarbonise, so the announcement by the Department of Business, Energy and Industrial Strategy on 11 April of a new scheme supporting heat networks was good news. The scheme will offer grants and loans to both public and private sectors, consumers and public buildings such as hospitals and schools, for any network serving two or more buildings. It is part of the Heat Network Investment Project (HNIP) which was formed in 2015 with a budget of £320 million. HNIP hopes to support up to 200 projects by 2021 and lever in up to £2 billion of other investment.

Heat networks (also known as District heating) pipe hot water to and within buildings in a given area from a central boiler. Compared with many European countries the UK has few such schemes (see Greenbarrel, Dec 2017), even though they offer several advantages. They ought to be more efficient because although there is loss in the pipes this should be more than compensated for by having a single large boiler rather than many individual ones. This means the heat should be cheaper, which is certainly true on average (up to 30 per cent is claimed), but may not be so in particular cases. Once on a scheme the user cannot change to a new supplier if, as has happened, the central boiler is badly managed or has problems.

But, unlike individual boilers, the central boiler can be easily set up to reduce carbon emissions using one of the three possible heat sources: recovered heat, generated heat and combined heat and power (CHP). 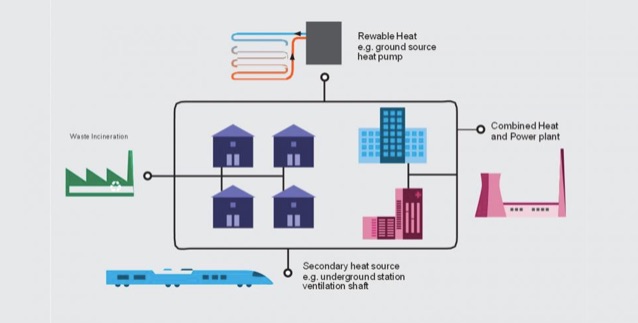 Illustration of a heat network (www.london.gov.uk)

Recovered heat is heat already generated, for example from a geothermal source, an industrial process (which could include an Underground or Metro), sewerage, or water/air via a heat pump. Generated heat covers the classic boiler, which might use biomass or biogas, while a CHP system could run on biomass or energy from waste or as a by-product of any electricity generating system. Note that even if the generated heat or CHP system burns natural gas or oil there is the possibility of capturing and storing the carbon, something which is impractical with individual boilers.

There are thus many options, so it is slightly disappointing to read that of the nine pilot projects funded last year by the HNIP five were gas-fired CHP and one a gas-fired boiler. Of the other three one is a biomass-fueled CHP in Crawley, one is a heat pump in Colchester using water from an aquifer, and the third is an addition to an existing energy from waste plant in Sheffield.

Heat networks are certainly a useful technology but how widely can they be used? They are difficult to introduce in already developed areas and buildings. Interestingly, there are many blocks of flats built before the middle of the 20thcentury that had central boilers and internal heat networks, but these were abandoned long ago and replaced by individual gas boilers. Unfortunately the cost of putting the old pipes in order and installing a new central boiler is probably prohibitive.

The current UK goal is to have 18 per cent of heat delivered by heat networks in 2050. This seems realistic but not very ambitious, as does the timing of the newly announced scheme: it will only reach the stage of being open for applications in the autumn.