ITM Power specialises in the manufacture and provision of integrated hydrogen energy systems. Founded in June 2001, the company floated on London’s Alternative Investment market (AIM) in 2004, claiming to be the first United Kingdom (UK)-based fuel cell company to go public. ITM believes hydrogen is the cleanest fuel available but you can’t dig it up or explore for it, you have to make it. By utilising spare renewable energy and putting it through an electrolyser hydrogen can have many green uses across the energy chain.

ITM has focused on two core areas in the ground-breaking unfolding hydrogen economy. The first is energy power-to-gas; energy storage. The UK’s National Grid/HyDeploy project seeks to address a key issue in the UK, namely how to reduce the carbon footprint as a result of heating homes. The UK has a world-class gas grid delivering heat conveniently and safely to 83 per cent of UK homes. Emissions, it seems, can be reduced by lowering the carbon content of gas through blending it with hydrogen.

The practice of using hydrogen to diminish carbon content in gas grids has been enthusiastically adopted in Germany, but such schemes are still embryonic in the UK. Nevertheless, ITM has started work examining the potential deployment of large-scale Power-to-Gas energy storage within the boundaries of the Northern Gas Networks gas distribution system. The work, funded by the Department for Business, Energy and Industrial Strategy (BEIS) as part of the Energy Storage Feasibility Study Competition, was launched in January 2017 and will be completed in Q1 2018.

The other core area of focus is the production and supply of hydrogen for transport and the construction of stations for hydrogen cars drogen cars are vehicles where the hydrogen can interact with an intake of oxygen through a vehicle’s fuel cell to produce an electrical energy charge with the only emission being water.

Hydrogen as a transport fuel has long had thematic backing in the UK but it has not gained traction on the ground; and fuel cell hydrogen vehicles have lagged behind battery charged vehicles (EVs) such as Tesla produces for the electrification of road transport. This is the case even though hydrogen based cars can take a few minutes to charge, while EVs can take hours. Against this, like a mobile phone you can recharge an EV at home overnight, or pop into a roadside garage when you run out of power. With hydrogen cars you can’t do this, because there have not been any refueling stations. This in turn has led to so-called “range anxiety”. 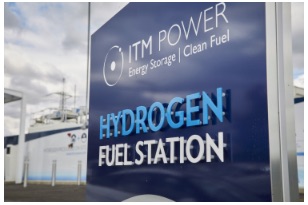 Some will see this as a classic “chicken and egg” situation: no cars without refueling stations, no refueling stations without cars. ITM has been a pioneer in breaking this circle. On 11 October 2016, ITM Power formally opened its third hydrogen refueling facility. It was the first of its kind, using solar energy from a PV array to make renewable hydrogen on-site. Like the two stations opened earlier in Sheffield and Teddington, this is a specialised facility, at the Centre of Engineering Manufacturing Excellence (CEME) at Rainham, Essex. But further facilities were planned for Shell forecourts. A scheme was talked about that envisaged a network of 60 commercial refueling centres by 2020.

This fledgling hydrogen refueling network in the UK, should have been given a boost by the introduction of the Miral which was introduced to the UK commercial market by Toyota in 2016 (sometime after its initial launch in the US and in Germany.) This hydrogen car admittedly retailed at over £60,000, but fueling the Miral takes two or three minutes. Equally important is the fact that the claimed range of 533 kilometres should resolve the problems with “range anxiety” which so bedeviled early electric cars.

Despite this, progress seemed slow. Then, in its trading and operations update of 30 November covering the period since the announcement of its successful placing and open offer on 29 September 2017, the company said it currently had £20.2 million of projects under contract and a further £22.4m of projects in the process of negotiation. The total of £42.6m is an increase of £5.9m in the two months since the placing and open offer. The company now has 12 refueling stations which its owns. Five stations are under construction. Altogether these 17 units amount to over 5MW of installed capacity. The production plan starting in 2018 already exceeds 15MW of capacity.

ITM has not done all this by itself. ITM has entered into 17 fuel supply contracts for fuel cell electric vehicles. These include: Honda, Toyota GB, Hyundai Motor UK, Skanska, the Science Museum, Johnson Matthey. At the same time it has not always been easy. Like any renewable energy start up ITM has had to establish its technologies and products and get over regulatory hurdles in the absence of any revenue streams, which has meant the company is not profitable.

The accounts for the year ending 30 April 2016 show a loss from operations of £4.4m. House broker Investec forecasts that losses will continue until 2020 although they should gradually diminish to £2.4m by then. The company has depended on grants and subsidies together  with constant visits to the market for funding. It will probably have to do so again. The market does not seem to mind however. On 6 April 2016 the share price was 11 pence.  The share price of the £122.86m market cap company was 38.45p last night up from a 52-week low of 16.64p.