On 31 March Greenbarrel looked at hydrogen from a technological perspective as a potential solution to the intermittent nature of those renewable “stalwarts”, solar and wind. But how does this technology look from a company perspective? We put this to Sir Roger Bone who took over the Chairmanship of ITM at the beginning of November 2019.

He started by making two key points: the first was that ITM’s financial profile had been transformed last October by the purchase of twenty per cent of the company by Linde, the world’s largest industrial gas company by revenue and market share.  While ITM was still not yet turning a profit, the market now was showing confidence that profitability was in sight. The company had a successful fund raising in October 2019, some of the German banks followed Linde’s investment and as a result the share price had risen from around 40p in October to 165p in mid-February 2020. (by comparison almost exactly five years ago the shares were changing hands at 11p) It was one of the few shares to rise initially as the market responded to the Corona virus, but inevitably the share price had fallen somewhat since.

The second point was a development of the first. For a long time, ITM had been compelled to invest time, effort and money in infrastructure projects, essentially to keep the lights on. But the company was not an infrastructure specialist, its’ real strength was in Electrolysis where it claimed to be the global leader. Evidence of this was the fact that the company’s largest single project was with Royal Dutch Shell, at the Wessling refinery site, within the Rheinland Refinery Complex in Germany where electrolysis modules totalling some ten MW had been installed. This was the world’s largest PEM* electrolyser. It will generate a modest amount of the large quantities of hydrogen  used in the refining process for desulphurisation and hydrocracking,  as well as helping to test the technology. 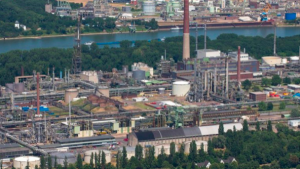 He added that there were many other actual and potential uses for clean hydrogen in industrial processes, including steel, glass manufacture, mining etc. And in addition to all this, hydrogen has a major role to play in energy storage whereby hydrogen generated from electrolysers can be stored and e.g. injected into gas distribution networks to help with grid balancing. The prospects were limitless.

We then turned to the topical question of electric cars. Roger Bone explained that about two years ago Toyota had announced that in their view fuel cells powered by hydrogen would be the answer to the electric power conundrum and had backed up their choice by bringing out a hydrogen-powered car, the Mirai. Of all the car companies, Toyota should know. Their argument was that a tank full of hydrogen was intrinsically no more dangerous than a tank full of petrol and a refuelling time of some forty minutes for an electric car could not compare with a refuelling time of three minutes or so using hydrogen. And the driving range for a hydrogen powered car would be comparable to petrol and diesel cars, far superior to a battery driven car. Then there were the de-carbonisation advantages of using a fuel whose emissions were only water.

Interestingly, the refuelling question reinforced an earlier point. The need for cash now had meant that ITM was forced to put a lot of resources into infrastructure, i.e. refuelling stations, yet after some years’  experience, the result was maybe seven (expensive) facilities, mostly on Shell forecourts. A few more were promised and would be welcome, but even then the result was hardly the sort of reliable network needed to persuade Joe Public to switch to hydrogen cars. Additionally, at current oil prices (Brent at around $25) hydrogen would struggle to compete, though the price of hydrogen would surely come down as volumes increased. The basic point remained that ITM needed  others to help shoulder the responsibility for the expensive investment in infrastructure and thus help ITM to concentrate on the generation and supply of hydrogen. This was one of the advantages which it was hoped the newly established joint venture with Linde would help to achieve. In any case, hydrogen as a fuel was probably more suited to the heavier end of the automotive market, lorries, trains, even ships, though there was a fleet of taxis in London now using hydrogen.

*This means Proton Exchange Mechanism, a technology which uses electricity (renewable) and a stream of tap water to generate hydrogen gas on site.