Why has ITM yet to make a profit?

ITM was founded in 2001, and quoted on AIM since 2004. It is one of the few companies to have real experience in various different applications of hydrogen, and now claims world leadership in PEM Electrolysers. Yet the share price is a bit of a conundrum. At the beginning and for some years the share price enshrined a somewhat nugatory value, which really only changed a few years ago, when the company focused more narrowly on electrolysers. The share price then rose considerably, but when it fell again, it still remained high enough to constitute a significant market cap, though this may also reflect the considerable investment and confidence shown by the Dutch company, Linde.

Either way, this seems at first glance to be somewhat surprising. For the company is yet to be commercially profitable. But apparently this is to be expected from companies in emerging industries, which expect to plough sizeable sums into Research and Development in the hope that, in the future, profitability will be achieved with a permanent move into the black. Seasoned observers would say that the nascent hydrogen industry is no different. Potentially profitable companies will eventually obtain enough investment. 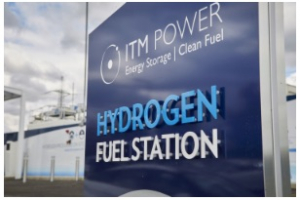 Is this an adequate explanation for the current situation of ITM? Not really. For example, the company would add that, while “everyone” knows that green hydrogen will be the fuel of the future, the strength of the lobbying power of the oil majors is shown by the interest still shown by government in blue and grey hydrogen. The company also says that it has been penalised by a recent change in the accountancy rules (IFRS 15?). Previously, tax relief could be obtained immediately from regular payments to a project, but since the change it seems that relief is only available once a project has been completed. It is possible to envisage that such an alteration might well have a particularly adverse impact on a start-up making large commitments to a continuing project not yet completed.

In addition, there will those who say that the path to profitability becomes more difficult even as the hydrogen economy becomes both more fashionable and more of a reality. For competition increases, as evidenced by Clean Power Hydrogen, which is active in the same specialised sector of the market as ITM and listed on AIM earlier this month. This also underlines the difference between those on the side-lines who generally welcome the hydrogen economy, as they accommodate themselves to whatever technology is adopted, and those who are competitively engaged in ensuring that it is their technology which comes through and prevails.

It is tempting to concentrate only on the last few years, when ITM shares began perhaps to react a bit more rationally. But that still does not entirely explain why there is such a divergence now between the market cap and the lack of profits. The answer perhaps lies simply in faith in the future, rational or not. Let us hope that a technological revolution will happen, which is certainly more likely than it looked ten years ago. That would mean that there is plenty of room for a company in the sector to become profitable, maybe more than one.