On 22 July ITM Power announced that it had signed an agreement to lease new premises at the PLP Bessemer business park in Sheffield for the construction of its hydrogen-producing electrolysers. The 134,000 square feet building will give ITM an electrolyser manufacturing capacity of up to 1 GW per annum which, according to the company, will be the largest in the world.

ITM has been active in the hydrogen energy business for nearly twenty years. Its main business is selling electrolysers, which use electricity to split water into hydrogen and oxygen, and also providing the hydrogen directly. The markets are in the chemical industry, transport with fuel-cell vehicles, storage of renewable energy and heating. 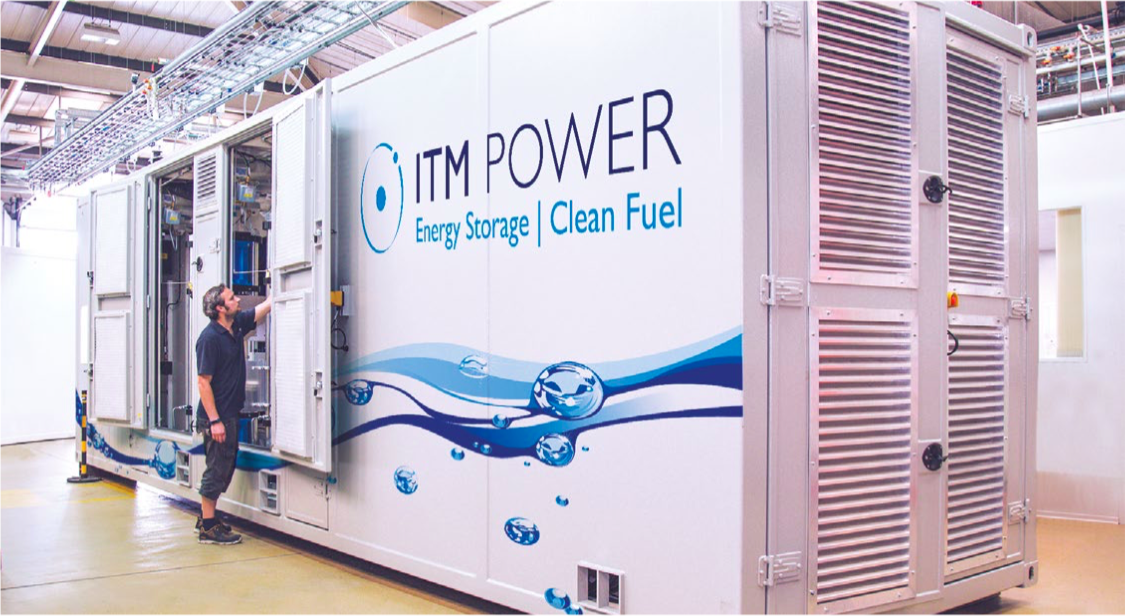 Hydrogen is often mentioned as one of the keys to a zero carbon economy, but there is a wide range of opinions as to how large a role it will play. In the Committee for Climate Change’s Net Zero report (achieving net zero CO2 emissions in the UK by 2050) the Further Ambition scenario predicts the need for 31GW of hydrogen power of which 44 per cent is for industry, 26 per cent for shipping, 20 per cent for heating and 9 per cent for transport.

This would provide a healthy market for ITM except that the Committee, as well as most other authorities, consider that steam-reforming methane will be a cheaper method of hydrogen production when required at a large scale (in this method methane and steam are converted into hydrogen and CO2, with the latter being captured and used or stored). It is the cost of electricity that makes electrolysis expensive, so that in the Further Ambition scenario, only 5GW are produced by electrolysis.

Nevertheless there is a wide range in the estimates as to how much hydrogen will be needed, the main uncertainty being how far the gas grid should be converted to hydrogen. ITM says that between 6 and 17GW of electrolyser capacity will be required by 2050. Also, for small and medium scale production, electrolysis is more practical and cost-effective.

ITM has a portfolio of 34 projects involved in many aspects of the hydrogen economy. The largest is the 10MW Refhyne project at Shell’s Rhineland Refinery on which construction started in June. The project is funded by various EU bodies and is intended to test the use of electrolysers on a large scale and to see how successfully they can be integrated into the refinery process.

Many of the projects are funded by grants from public bodies. HyDeploy is a project with the UK Northern Gas network that is funded by Ofgem to test the level of hydrogen that can be added to the gas network safely and without changing existing domestic appliances.  Earlier projects in Germany have looked into converting excess renewable energy into hydrogen that is then stored in the gas network. The potential volume that could be stored this way is large.

The most visible and commercial project is the establishment of a hydrogen refuelling network in the UK. ITM currently operates 2 stations on Shell forecourts at Cobham and Beaconsfield. The agreement with Shell has recently been extended until 2024 with four more stations coming at Gatwick, Derby and in London.

With the heavy dependence on grants it is not surprising that ITM have not yet recorded a profit. For its financial year ending 30 April 2019 the company has announced an unaudited total income of £17 million (2018: £14.1m) with a loss before interest, tax, depreciation and amortisation of £6.7m (2018: £4.9m). In 2018 approximately one quarter of total income came from sales. Total financial assets at the end of April were approximately £20m of which £5.3m in cash.

ITM appears to be well placed in the hydrogen energy market. With 170 staff and its new Sheffield factory it should be able to commercialise its products and satisfy orders for some years. In the longer term its future depends on how far hydrogen is accepted as a source of energy and energy storage. Its share price stands at 39 pence, mid way between a five year low of 11p and a high of 56p, for a market capitalisation of £128m.