Will hydrogen cars eliminate diesel and petrol engines from the roads

Hydrogen cars are vehicles powered by a single hydrogen fuel cell. The fuel cells work by using a “fuel stack” to use outside air with hydrogen they carry in tanks in a chemical reaction which creates electricity, with the only emission being water.

I came across an early prototype of such a car about ten years ago while staying in my holiday home in Unst the northernmost of the Shetland Islands. There was and is a small renewable energy company in the nearest little town, Baltasound, called simply `Pure’.

Pure had two 6KW wind turbines to produce energy some of which was used to electrolyse water to produce hydrogen which powered a converted Riva car.

I was invited to drive the Riva, which the guys at Pure told me was the UK’s only licensed hydrogen car at that time. I asked them how far it would get me. They said I could drive to Lerwick the capital of Shetland 55 miles away.

I asked how I would get back. They said: “That’s the problem.” 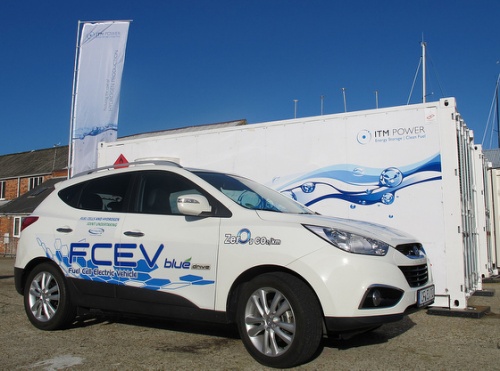 The Riva is a small car and lightly compressed hydrogen needs a lot of space. I would need a trailer twice the size of the Riva full of canisters to get back. There were and are no hydrogen filling stations on Shetland.

So there were, back then, two problems. This hydrogen car did not offer much mileage and second, there was no way of getting more hydrogen once on the road.

A decade later Japanese car giant Toyota recently (in October) showcased in an exhibition in Hamburg called `Back to the Future,’   what it called the first mass market hydrogen car.

Having spent many millions worth of dollars on development Akio Toyoda , chief executive of Toyota  said its Miral  hydrogen electric fuel cell  vehicle hybrid (FCEV), represented a ` new start` and it and it’s like could  eliminate petrol and diesel engines from its fleet by 2050.

The Miral is a 4.9m long saloon with large grills which dominate the front end. The air intake behind the grilles are integral to the advanced technology inside the vehicles.

Oxygen, drawn in through the slats and high pressure hydrogen stored in two large tanks pass over a stack of fuel cells and, like the Riva, causes a chemical reaction that produces electricity to power the vehicle.

The move into hydrogen powered cars echoes Toyota’s big bet two decades ago on petrol-electric hybrids. It launched the Prius and has sold 8mln worldwide. The Prius requires no charging infrastructure since the electric boost is provided from energy from regenerative braking.

The advance by Toyota, the world’s largest car-maker into hydrogen cars with the Miral, which in Japanese means “future” has sparked a debate about the virtue of hybrids versus electric cars.

Electric cars are run essentially by batteries and can takes hours to recharge. Fights are known to have broken out at some stations in the US. Ideally, like a mobile phone. an electric car could be recharged at home overnight. But what if you don’t have your own driveway or garage?

Against this the Miral takes three to five minutes to refuel. Moreover, the highly pressured hydrogen tanks seem to have cracked the problem of limited range to some extent. The Miral can apparently be driven 533 kms without refueling, much more than an electric car.

But is this really enough? You run into the old problem about lack of infrastructure. There are, for example, only five hydrogen refuelling stations in the UK and they are all in London.

The Financial Times quoting analysts at Goldman Sachs say that Hydrogen filling stations require upfront investment of the equivalent of US$3.2 to US$4mln against US$800,000 for petrol stations in Europe. This means infrastructure will develop slowly.

There is also the price to be considered. The question is will customers be prepared to pay £66,000 in the UK for an obscure technology