As discussed in a recent Greenbarrel article on the Energy White paper, the government has reversed its earlier disinterest in small nuclear reactors and is now talking about putting the UK at the cutting edge in a field that it once led.

The White Paper divides these reactors into two groups: Small Modular Reactors (SMRs) and Advanced Modular Reactors (AMRs). SMRs use water to cool and shield the radioactive core in a design that has been proved in large commercial reactors, but are built on a small scale, with a capacity to produce about 400MW of electricity versus about 3000MW for Hinkley Point C. The idea is that once the design is certified the reactors can be mass produced with modular components leading to significant economies of scale. Rolls Royce is one of several companies that are working on this design.

AMRs are also modular in design but use new materials and techniques to cool the core. They are also “passively safe” or “walk away safe” meaning that they do not need human or machine intervention in order to control the cooling. The tsunami at Fukushima in 2011 flooded the emergency generators that were needed to pump water around the nuclear core, thereby causing the nuclear disaster. 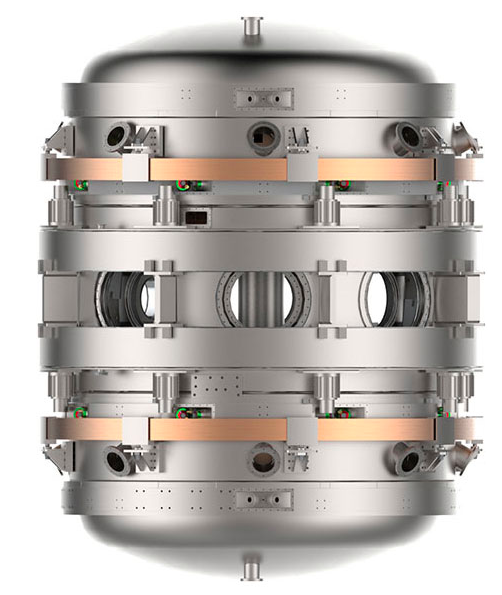 External view of the tokamak (www.tokamakenergy.co.uk)

In 2018 the government awarded contracts worth up to £300,000 to eight companies to produce feasibility studies as phase 1 of an AMR Feasibility and Development programme. The eight companies all had different ideas but were given a common set of goals: their designs should be modular so as to maximise the amount of off-site factory fabrication and to generate low cost electricity with flexibility. In addition to providing electricity they should consider providing heat for domestic or industrial use, or to facilitate the production of hydrogen.

Of the eight companies, four used solid or molten solid coolants (lead, salt or sodium), while three used gas coolant in combination with specially prepared granules of uranium encased in absorbing material such as graphite and silicon carbide that cannot melt. The eighth design was based on nuclear fusion. Four of the companies were UK based, three from the USA and one from Sweden. Most had strong links to Canada.

On 10 July 2020 the Department of Business, Energy and Industrial Strategy (DBEIS) announced that three of the designs had been selected for further funding in Phase2 of the programme. Appropriately, one uses solid coolant, one gas coolant (helium) and one fusion.

The solid coolant version is being developed by Westinghouse, in association with the Italian organisations Ansaldo Nucleare and ENEA. Westinghouse is a large US company that has been developing traditional nuclear reactors for many years. Its design uses liquid lead as the coolant and shield. Lead has many advantages, not least because it has a very high boiling point (hence avoiding the danger of nasty gases escaping), and conducts heat well. It is expected to have the capacity to produce 400 MW of electricity but can also store thermal energy.

The helium version is being developed by U-Battery, a UK-based company. The design uses tri-structural isotropic (TRISO) granules such as described above. It is small, with a footprint “…equivalent to the penalty area on a football pitch and a volume equivalent to two squash courts.” It can produce 10MW of thermal power or 4MW of electrical power or any combination in between. It is designed for remote, off-grid operation or as the power source for a factory, and can run continuously for five years on its initial fuel.

The fusion option is from Tokamak Energy, based near Oxford. Fusion takes place in a plasma of deuterium at an extremely high temperature (a hundred million degrees Centigrade) which must be kept away from the walls of the machine. The plasma is held in the centre of a spherical tokamak (a toroid or doughnut, to most people) and is kept there by magnets made from high temperature superconductors. Power output is expected to be in the range of a hundred MWs.

There are other competitors in the field, as well as the large scale, International Thermonuclear Experimental Reactor (ITER) based in the south of France. So far Tokamak have achieved temperatures of 15 million C. It expects to produce energy from fusion events in about 2025, at which point the critical issue – which no one has yet achieved – is to get more energy out of the system than is put in.

All three AMR companies hope to have working examples before 2030. They offer the real possibility of making nuclear power affordable and safer, although the issue of disposal of spent fusion fuel is not yet solved. Although they all have private investment, consistent government backing will be important, if only to attract the companies to the UK rather than elsewhere. The DBEIS is making up to £45 million available to support this phase.