Buildings in the Energy White Paper

Following the thoughts on Oil and Gas in Greenbarrel of 19 January 2021, it is now clear how crucial future governmental policy on Buildings will be. As the beginning of Chapter 4 of the Energy White Paper (WP) makes it explicit that for the UK to reach the net-zero target by 2050 meanslargely eliminating emissions from domestic and commercial buildings. Emissions from homes and from commercial and public sector buildings account for 19 per cent of total UK greenhouse gas emissions. This makes buildings the second largest source of emissions after transport. A substantial part of the reason is inadequate insulation. Around 16 million homes in England, or two out of every three, are at the level of Energy Performance Certificate D or worse. To raise the level just to Performance Certificate C will be a major challenge.

The WP states, “Tackling emissions from buildings will take many years to deliver but it is a journey which must start now. The 2020s must be a decade of action to put the country on the path to net zero emissions by 2050. Depending on fossil fuels for heat or tolerating wasteful loss of energy in poorly insulated buildings is not sustainable. Action now will put us on a pathway to affordable, green and healthier buildings. Inaction will mean more disruption when we do eventually address the challenge, as well as higher bills and a lower quality of life in our homes and places of work.” 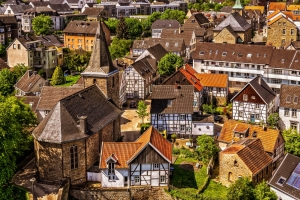 Image by Peter H from Pixabay

Correct. But exactly how will the Government ensure that net-zero is achieved by 2050? The answer is, once again, governmental action in the future, directed particularly to the areas where the Government has the most regulatory leverage. Most of the various techniques it proposes to use are conceptually familiar – heat pumps; increased “green” biomethane in the gas network; district heating; “clean” hydrogen; carbon capture utilisation and storage. But all these technologies, while certainly available now, are untested at scale, and, equally important, have yet to be proven to be cost competitive.

Will it really be practicable to roll out a programme to install heat pumps in all new builds, given that less than 1 per cent of homes currently uses a heat pump? The Government’s estimate in the WP is that the percentage of biomethane in the gas supply can be tripled. This will help, but probably only at the margin. Other technologies are perhaps more promising, but less market-ready. For example, asthe WP also points out, around 95 per cent of global hydrogen production is fossil-fuel based. That is well known. Net zero by 2050 implies a switch to “clean” hydrogen and a major increase in global production capacity. The Climate Change Committee (CCC) suggest the UK may need at least a ten-fold increase by 2050, possibly more, depending on the scale of hydrogen use in heat, transport and power.Is that possible? Yes, but it is far from certain to happen.

Similarly, the idea of Carbon Capture, Utilisation and Storage (CCUS) has been around for ages, but CCUS has yet to be validated commercially. And two attempts to jump start this approach on a more cost effective basis have failed. Nonetheless, the WP states “We will support the deployment of at least one power CCUS project, to be operational by 2030, and put in place the commercial framework required to help stimulate the market to deliver a future pipeline of power CCUS projects”. The Prime Minister’s Ten Point Plan for a Green recovery has already assumed almost holy status, being referred to innumerable times in the WP. Will his Plan and his support make the difference this time? We must hope so.

But Boris Johnson will also need to do much more to tackle emissions from transport, the single largest source of pollution. Leaving his proposed actions on electric cars aside, £20 million for a competition to support the design and development of clean maritime technology and £15 million for a competition to support the production of sustainable aviation fuels in the UK do not begin to deal with the scale of the problem of decarbonising transport.