Verditek’s progress has been slowed by the pandemic

Verditek’s main business is the manufacture of lightweight, flexible solar modules at its plant in Milan. In spite of the heavy toll from the corona virus in that city it had announced on 6 April 2020 that it was restarting its production line and expected to report its first revenue by the end of the year.

However in a year-end update issued on 21 January 2021 the company said that the virus had caused several clients to delay trials and orders. Revenues for 2020 would therefore be minimal, and the goal of having a positive cash flow by the end of the year would not be achieved. As there was 1MW worth of panels in stock, production was being cut back. In October the company had raised £3.5m on the stock market by offering shares at 8p, so that by the end of the year it had cash in hand of £1.7m with no debts.

Unfortunately the market has not been too impressed with the current trading price at 4.8p, down from a high of 18p in August 2020, but above its all time low of 1.98p in March 2020. However there are reasons to hope that once the coronavirus is under control it will get back on track. SAF, a Pakistan construction group operating in the oil and gas sector, had completed a successful trial of Verditek’s panels last summer and was ready to proceed with an order for 1.5MW, worth about £1.6m. This order is now delayed as it diverts its efforts to help the government manage the pandemic. 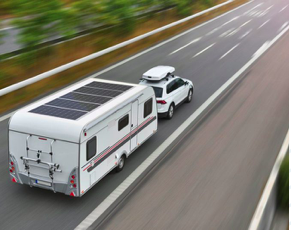 Power Matts on top of a caravan (www.verditek.com)

The panels are to be installed on the roofs of portable cabins in remote sites. They offer several advantages over conventional panels: they are much lighter making the cabins they are fixed to easier to move; they are flexible, so can adapt to irregular cabin roofs; and they are much less fragile and less likely to be damaged while moving.

There are other clients in the mining sector trialling the panels for similar reasons: InterGroup, an Australian gold miner, and Black Tulip Mining in Peru. In most cases the panels are not the sole source of power but operate in combination with a diesel generator. The panels reduce the need to transport diesel as well as providing a back-up source.

Verditek’s panels, now called Power Matts, are aimed at niche markets where their advantages are important. This includes not only remote camps but also telecom towers, while in the transportation sector they are being tried out on the roofs of electric carts and lorries, for marine applications and for use with small EV charging stations. Their current price, which is around £1m per MW, is not competitive with standard panels from large manufacturers for most normal installations, hence the focus on suitable niche markets.

The panels are light and flexible because the solar cells are mounted on a polymer backing instead of glass. The panels are only 3mm thick and weigh 2.5 kg per square meter, about ten times less than conventional panels, but produce the same power since they use the same cells. The latter are connected by a special system of nanowires that reduce the electrical resistance and improve efficiency.

The plant in Milan can produce 60MW of panels per year if worked with three shifts. This is plenty for current prospects. The company is looking to improve its product through a co-operation with Paragraf, a spin-off from Cambridge University who are experts in graphene. Graphene is highly conductive and very strong, so that using it to connect the solar cells improves the efficiency and durability of the panel even further. An experimental version has been completed but it is not yet clear when or how it will be commercialised. It may be most profitable to licence the technique to major manufacturers, rather than keep it in house.

Verditek has an interest in two other businesses: a 23.6 per cent stake in Industrial Climate Solutions, a Canadian company that makes a gas-liquid froth which is effective in absorbing carbon dioxide and other gases and particles in industrial processes; and a 51 per cent stake in BBR Filtration, a Hampshire based company that makes fluidised bio-filters to remove noxious gases such as hydrogen sulphide from the air released by sewage plants and paper mills.

Like many other people, Verditek is waiting for the pandemic to be over so that it can sell more of its products and get back on track.