The dangers from nuclear fusion are far less than from fission but not negligible: the government considers regulations

On 1 October the government issued a Green Paper while launching a consultation on the regulatory framework for fusion energy. As a method of producing energy, it is well known that nuclear fusion is much safer than nuclear fission, but it does still present some hazards. It is also being developed by an increasing number of organisations. The International Thermonuclear Experimental Reactor (ITER) in the south of France is the largest and most well-known but there are many other public and private organisations worldwide investigating the technique. However, a working reactor is some way off. ITER does not expect to operating before 2035 while the UK Atomic Energy Authority’s reactor will only be ready in about 2040.

In the UK, nuclear fusion projects are currently regulated by the Environment Agency and the Health and Safety Executive like any other activity involving radioactive substances, such as X-rays or CT scans. Unlike nuclear fission plants they do not need nuclear site licences nor are they regulated by the Office of Nuclear Regulation. Should they continue to be handled the same way, or should the regulations be changed when bigger and more commercial devices are in operation? It seems that most countries handle all radiation matters through a single nuclear agency, while fusion is not yet covered by any international agreements on nuclear liabilities.

Current fusion reactors aim to fuse two isotopes of hydrogen, deuterium and tritium. They do so when heated in a plasma to temperatures that are sufficiently high (100millionoC) that they not only fuse but also release enough energy for the reaction to be self-sustaining. Unfortunately, the reaction also produces neutrons which bombard the containing vessels and activate some of the elements within them. 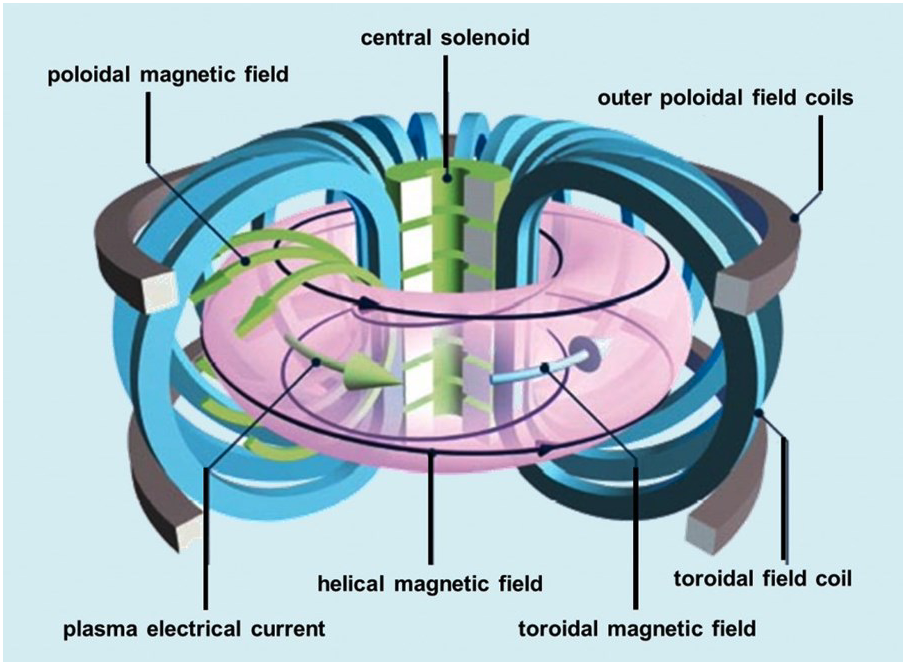 A major problem of fusion reactors is how to hold the extremely hot plasma (in pink) away from the containing walls. Using magnetic fields and electric currents to guide the plasma, the current preferred solution is the tokamak above (from the Russian acronym for toroidal chamber with magnetic coils). The next problem is how to get out more energy than is put in to heat the plasma. So far, the closest anyone has got is 16MW out for 24MW input, from the Joint European Torus at the Culham Centre near Oxford. (www.iter.org)

The plasma is held within multiple levels of containment, but even so there are three particular hazards: tritium, activated materials and the effect of an accident.

Tritium is a radioactive substance with a half-life of 12.3 years. It is rare in nature and usually produced by irradiating lithium in a reactor. It is used commercially, for example in medical diagnosis and when combined with phosphorus to make luminated signs. Current research reactors use a few hundred grams of tritium, but a future power plant may use a few kilograms. In normal operation it can be held securely, but it does permeate materials so an old fusion plant will have a certain radioactivity from tritium. On the plus side the radiation has low energy and the half-life is short.

All the components of a fusion reactor can be activated by neutrons to some extent. This means that a decommissioned reactor can be considered radioactive waste. However, unlike with the fuel rods from a fission plant, there should be no high level waste. Most will be low level waste which can be disposed of in special surface facilities or, for the bottom end of the range, in normal landfill sites. There will be some intermediate level waste, but a single fusion power plant should generate less than one percent of the UK’s total intermediate inventory. Most of this should decay to low level waste within 100 years.

The main advantage of fusion over fission is that in the case of damage from an accident such as an earthquake, the reaction will stop immediately (it is hard enough to keep it going at the best of times). Some tritium and activated dust could be released into the atmosphere but, as already mentioned, this is not high level waste. The Green Paper estimates that in the very worst case, in which all of the dust and tritium from a large power plant were to be released, a person at 1km from the site could suffer mild to acute radiation effects while someone at 10 km could have the same exposure as that of a CT scan of the spine.

The Green Paper lists 35 questions on which it would like advice. The government proposes to make only minor changes to current regulations, but to require a justification from the Atomic Energy Authority for the use of ionising radiation to generate energy. Such a procedure is currently needed for any new type of fission reactor and has so far only been accorded to fusion research and development.

Finally, to smooth the path of planning permission for a fusion power plant, the Paper proposes that a National Policy Statement be prepared, so that only specific, local planning issues are considered not broader policy questions. In this and the other issues the government’s main objective is to show that the UK is open and welcoming to nuclear fusion, and to thereby encourage investment in the technique.

By Julian Singer|2021-10-12T08:14:26+00:00October 12th, 2021|Nuclear|Comments Off on The dangers from nuclear fusion are far less than from fission but not negligible: the government considers regulations