One of the most interesting facets of the French Television since early September 2020, (aka the “rentree”) is the sheer number of advertisements for electric cars. Now it would be possible to argue that what we are seeing is merely the usual number of adverts for new cars, which this year happen to be electric. But this line of argument begs the question of why so many of the new cars are electric, or at least come with several different “electric” options.

The detailed figures provided by the French authorities show that there are now no less than forty types of electric car to choose from, albeit that twenty-eight of these types have so far sold under a thousand units. Perhaps the most striking feature is that the Renault Zoe has a market share of just over 38 per cent and, with sales so far this year of 23,102 cars, is more than twice as popular as the second placed car, the Peugeot 208 E (10,916 cars sold.) Third is the Tesla Three, with a market share of 6.5 per cent (3,942 cars sold) The other factor to bear in mind is that the Renault Zoe had a very similar share of sales in an admittedly rather smaller market for electric cars last year (just over 37 per cent). 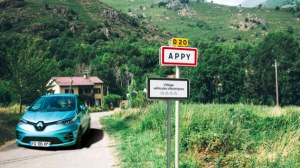 Like the UK, France sees a much cleaner post-covid world, with electric cars playing an important role as the automobile industry adapts to the new reality. But how will the new reality look? Again, like the UK, France produces figures for new registrations month by month. Up to August  this year (2020) 60,504 electric cars were registered, which is a substantial increase on 2019 (when only 42,764 electric cars were registered for the whole year) .Certainly 2020 is an atypical year, but the total number of registrations of new cars up to the end of August is almost a million (998,409), which suggests that electric car registration is now running at roughly six per cent of this (reduced) total, whereas the “electric” share of  the total of 1,467,924 registrations for the whole of last year turns out to be only some three per cent.

In France, at least, the authorities are helping the campaign for a switch to electric cars by intensifying the weight of incentives, both financial and administrative. They are e.g increasing restrictions on emissions which will make it more and more difficult to drive a conventional car through the centre of France’s major cities. That may be OK in a congested city like Paris: the key political question is whether such a trend in governmental action will also be acceptable to a rural population, which has already produced the “Gilet Jaune” protest movement: the next Presidential election is only eighteen months away.