There may be a price problem with Electric Cars

Up ‘til now, it has been possible to believe that the move to electric cars would occur relatively smoothly; the British Government had decided that no new cars could be sold after 2030 if they were powered by either petrol or diesel and a veritable barrage of advertising was unleashed, extoling the virtues of the forthcoming revolution. It was true that there was no mention of price in any of the advertisements. That was partly because, although the price of a new electric car was admittedly rather dear, it was expected to come down as more and more people joined the revolution and the advantages of mass production started to show.

But that has not (yet) happened. Instead, articles have begun to appear expressing some concern. In January 2023, the Times, under the heading “Electric vehicles: carmakers put the brakes on costly revolution”, reported that in its latest review of the market, the Advanced Propulsion Centre (APC),  had eased its’ prediction from its previous forecast of 360,000 fully electric cars out of one million produced, to 280,000 out of a production of 1.1 million vehicles. The centre apparently suggested that British and European manufacturers are slowing down the production of electric vehicles because they are too expensive for the vast majority of motorists and the article then gave various examples of specific manufacturers reducing their targets a little. 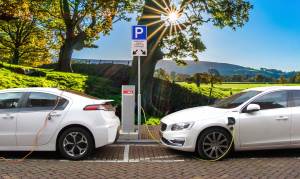 By Menno de Jong from Pixabay

A further indication that something might be afoot comes from the States: the share price of Tesla, the leading car company in the field of electric propulsion, having soared to a peak when its market cap was greater than all the other car producers put together, has now fallen to under $110, lower than it has been for two and a half years. It’s leading advocate and chairman, Eoin Musk, who still has some 424 million shares, is thought to have lost $84 billion since September 2022 (though no-one should lose any sleep over him – he is still the second richest man in the world). But it is worth noting that the adverse movement in the share price is in spite of President Biden’s “Green” push.

And the Advanced Propulsion Centre is not just any old organisation: It was originally formed in 2013 to use the Government’s money (i.e. ultimately taxes) to help the British automobile industry to move towards a carbon neutral future. When the centre says that affordability of electric cars is increasingly a problem throughout Europe, it is only giving expression to the common sense view that electric cars are currently too expensive. By contrast, BMW may only be responding to market pressure in concentrating more of its resources in China, which, let us not forget, constituted fifty-three per cent of the global market for electric cars in 2021.

All this comes on top of repeated warnings by the APC of a shortage of the increased quantities of   lithium likely to be needed to make battery-based electric cars the dominant force in the future. At the very least, the way forward looks a little more contested.