Carbon capture – a helpful stopgap or an unfeasible decoy?

At the UN Climate Action Roundtable last month, Boris Johnson declared that he was a “complete evangelist” for the technology known as carbon capture and storage (CCS). The broad idea is to remove carbon dioxide emissions from large sources, such as power plants, and deposit it securely underground. CCS proponents claim that climate targets would be impossible to meet without it, but others contend it’s a dangerous decoy, pulling funding away from greener initiatives to prop up the fossil fuel industry.

The separation of carbon dioxide is the costliest step. It can be done pre-combustion by converting methane – the primary component of natural gas – into hydrogen and carbon dioxide. Compared to the messy, complex mixtures of a power plant’s flue gasses, it is relatively simple to separate out the carbon dioxide for storage. The left-over hydrogen is then burned, with water as the only waste product. This method has proven to work on the megaton-per-year scale but is very expensive and inflexible to demand.

Alternatively, the combustion environment can be changed such that the only waste gasses are carbon dioxide and water; simplicity of the mixture again making it easy to separate. To achieve this, the fossil fuel must be burnt in pure oxygen, rather than normal air. Unfortunately this causes much higher temperatures, so power plants would need new combustion chambers capable of withstanding the extra heat. Combined with high cost of pure oxygen, so-called oxyfuel combustion was thought to be economically unviable. However, a new spin on the technology is currently being tested by NET power in Texas, USA. After the success of a 50 MW facility, they have moved on to a 300 MW version that is currently under construction for long-term testing. 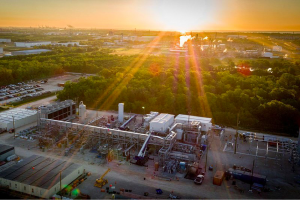 NET power facility in La Porte, Texas, USA. They are trying to make carbon capture easier with a new system for oxyfuel combustion. Photograph from www.netpower.com

No matter the capture method, the carbon dioxide must still be stored. It is commonly pumped into geological formations, such as saline aquifers or depleted hydrocarbon reservoirs. Sites have to be chosen carefully though, to avoid opening up cracks, causing minor earthquakes or contaminating the water table. Even though it’s very hard to utilise the theoretical capacity of such a formation, they are so large that they can still comfortably fit what carbon we do capture. And whilst they leak a small amount, the vast majority of carbon dioxide would be stably stored for several thousand years.

Alternatively, the carbon dioxide can be chemically reacted with various minerals to form carbonates – a carbon-containing mineral or crystal. Whilst much more stable, it is also more expensive and cannot handle the quantity of carbon dioxide that would be needed so easily. This is the chosen method of the Icelandic company Carbfix. Instead of attaching to power stations, they suck in air to dissolve the carbon dioxide in water and store it in the porous basalt rocks common on the island. Over the years, the carbon dioxide slowly reacts to form carbonates. By running on local geothermal energy, it is one of the only truly carbon negative projects around, but it relies so heavily on the rare geology of Iceland that this couldn’t scale to a truly global impact. 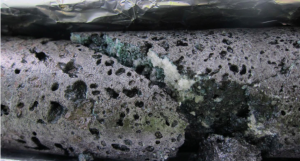 So CCS technology exists, some on a large scale, but there is no way around the fact that it would increase the cost of fossil fuel power generation significantly. One suggested mitigation of the cost is to utilise the carbon dioxide instead of storing it. Carbon dioxide can be pumped into partially depleted oil reserves to boost production, for example. Or it can be used in chemical reactions to create high added value products, such as pharmaceuticals, agrochemicals, fuel additives and polymers. Or it can be converted back into methane using solar- or enzyme-based reactors. CarbonCure, a company based in Nova Scotia, even reinjects captured carbon dioxide back into concrete. These products could offset some of the cost of capturing the carbon dioxide in the first place, but often just delay the carbon dioxide reaching the atmosphere; for example, fuel additives would simply be burned when used.

CarbonCure’s concrete is a slightly more complex situation. Normal concrete sets by absorbing atmospheric carbon dioxide, whereas CarbonCure injects captured carbon dioxide. There is no indication that the total amount of carbon dioxide stored within CarbonCure’s concrete is any higher than regular concrete absorbing it passively from the atmosphere. However, there are no zero-carbon alternatives for producing concrete, unlike in power generation. Therefore, robust CCS is currently the only viable way to reduce emissions from that sector.

Carbon dioxide produced from the combustion of fossil fuels is extremely difficult and expensive to avoid, at least in the quantities required to make a significant global impact. In regard to power generation, CCS could be – at worst – a misleading appeasement to continue the use of fossil fuels at the expense of investments into actually sustainable methods. Whilst CCS is likely necessary to hit climate targets, it shouldn’t be treated as anything more permanent than an emergency stopgap, to tide us over until a truly renewable energy grid can be attained.