Aviation is one of the hardest sectors to de-carbonise and without urgent action it could be one of the highest-emitting sectors for greenhouse gases by 2050. According to the Dept. of Transport, a British-led consortium comprising (at least) Virgin Atlantic, Rolls-Royce, Boeing, Imperial College, London, the University of Sheffield, the Rocky Mountain Institute (RMI) and ICF have won UK government’s funding for an inaugural net-zero flight from London to New York in 2023. This will be one of Virgin Atlantic’ Boeing 787s: the novelty will be that this will be a flight using solely 100 per cent synthetic aviation fuel (SAF).

There are many problems to be ironed out, not least that current legislation only allows up to fifty per cent SAF to be used in commercial jet engines, but that reflects existing safety concerns. By using 100 per cent SAF, the consortium will demonstrate the potential to decarbonise long-haul routes and thus bring the world closer to net-zero aviation. When fully replacing kerosene, a reduction of over seventy per cent in carbon emissions can be achieved by use of SAF derived from waste oils and fats, such as used cooking oil. (For the flight to be truly net zero, the remaining thirty per cent of emissions generated would need to be offset in some way.) 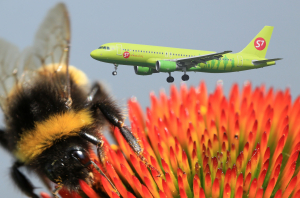 The real challenge to be overcome is more one of cost rather than one of technology: the production of SAFs is well known, but they are significantly more expensive than traditional kerosene derived from fossil fuels and as a result currently only produced in tiny amounts. According to the FT, annual production in 2021 was only 100 million litres, yet the industry estimates that 450 billion litres will be needed by 2050. For aviation is relying almost entirely on SAFs to enable it to cut its carbon emissions to net zero by 2050, given that more radical approaches, like engines powered by electricity or hydrogen, are not likely to be introduced in time.

Beyond all this is the future of the industry as such. The Government’s press release continues “As well as delivering cleaner skies, the development of a domestic industry for the production of SAF has the potential to improve fuel security and support thousands of green jobs.” The release tells us that in 2020 it was estimated that a UK SAF industry could generate a gross value added of up to £742 million annually and support up to 5,200 jobs by 2035. These figures look a little premature, to say the least. We are talking here of the first steps to solve a problem which has looked almost too hard.

But no-one will want to rush.  They say that in the late 1940s, during the negotiation of the Warsaw Convention on Civil Aviation, it seemed to be a good idea to agree that jet fuel would always be duty-free, so as to encourage air travel. Priorities change, but they have never managed to get all the signatories together again to change the regime!