The Chinese car market and the prospects for an electric future

Electric cars were at the forefront of the Chinese Motor show, which started on Wednesday 25 April in Beijing. News about new models was accompanied by a flurry of announcements about future Government regulation of what is now the largest car market in the world. (Figures from the China Association of Automobile Manufacturers (CAAM) show a total of 24.7 million passenger vehicles sold in 2017, out of a total of 28.88 million vehicles).

Not much has yet changed following the Chinese Government’s apparent relaxation of the requirement for foreign manufacturers to have a 50 per cent joint venture with a Chinese company (allegedly as a response to remarks made by President Trump). The explanation is partly that relationships with Chinese companies take many months to bring to fruition and partly that Chinese constructers are improving steadily. Though at the luxury end of the market foreign cars are still the number one choice, local brands now constitute some 44 per cent of all sales.

Given the Chinese Government’s understandable enthusiasm for electric cars, sales in China represented about half of total world sales of electric and hybrid cars in 2017. That sounds a lot, yet perhaps we need a bit of a sense of proportion: half of world sales of electric cars for 2017 translates into some 777,000 vehicles. By comparison with the figure of 24.7 million for total passenger car sales in China, that constitutes about 3 per cent of total sales, which is encouraging, but perhaps not yet overwhelming. 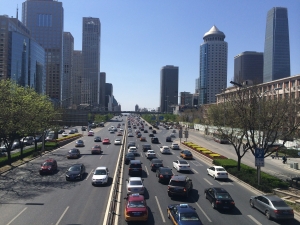 Of course, enthusiasts will point to the future and see the 57 per cent increase in electric sales in 2017 by comparison with 2016 as a clear sign that a veritable wave of electric cars is imminent. (There are forecasts of electric sales in 2020 reaching 2 million) They will also point to the new requirement from the Ministry of Industry and Information Technology that all large automobile manufacturers should ensure that in 2019 electric and hybrid cars constitute at least 10 per cent of their total vehicle sales. That figure is to increase to 12 per cent in 2020. Those manufacturers who fail to meet these targets will face financial penalties, including, potentially, losing their licence to sell conventional cars in China. In these circumstances it is not so surprising that in some cases manufacturers have announced their intention to completely cease production of conventional vehicles at a future date.

But these developments have to be seen in their overall economic context: the automobile industry has been a major driving force in China’s economic momentum in recent years and the industry is expected to continue fuelling the economy despite a relatively sudden slow-down in the rate of increase in car sales. In 2017, the four year run of double digit growth of the Chinese domestic passenger car market ended as sales increased by only 2.6 per cent, down from over 17 per cent in 2016. This is the lowest growth rate in at least a decade and a half, possibly longer and the forecast for 2018 is for another modest increase of between 2 and 3 per cent. But the slow-down is the result of recent Government action to phase out subsidies, rather than a reflection of general disillusion with the motor car.