District waste-to-energy schemes in the UK

On 9 January 2017, Greenbarrel published a Waste to Energy article, asking a specific question: “What do they do in Paris?” We are told that mainland Europe is showing its prowess when it comes to community heating schemes and that many people wonder why that sort of scheme hasn’t taken off here in the way it has on the continent. So, almost exactly a year on, it seemed right to probe a little and ask the question “Why are so little heat and power generated from waste in the UK?”

At first blush it seems that the common perception is true: Dr Robert Gross, director of the centre for energy policy and technology at Imperial College London, has even been quoted as saying “…there had also been a lack of progress in constructing district heating systems, a feature of many continental European cities, whereby hundreds or thousands of homes are heated from a central source, often reusing the otherwise wasted heat that is a by-product from fossil fuel power stations or rubbish incineration.”.

His view might seem to be contradicted by some statistics issued by the Department of Business, Energy and Industrial Strategy (BEIS) which state that from November 2011 to October 2017 a total of 17,734 non-domestic renewable heat schemes received accreditation in the UK. But digging deeper into the statistics we learn that the total electricity capacity of accredited installations was a not-terribly- impressive 3,760 MW, giving a rough average of 0.212 MW per scheme. What is more, the lion’s share of the capacity (3,393 MW) comes from biomass boilers, small, medium and large, rather than from plants which incinerate municipal waste. 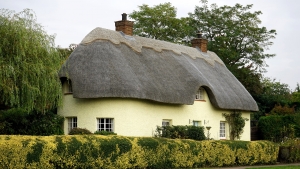 A traditional English house with a well-insulated thatch roof

For the truth is that there are a small number of community heating schemes in the UK based on burning waste. They may be efficient, but they cannot match the scale of the schemes in France and elsewhere on the continent. As an example, consider CO2 emissions: together, the so-called “top five” of British Community heating Schemes (Southampton, Sheffield, Nottingham, Leicester and the Olympic park scheme in East London) save an estimated 88,400 tonnes of emissions. The three plants in Paris save 900,000 tonnes of CO2. Sheffield burns 120,000 tonnes of municipal waste; Paris burns 1,760,000 tonnes of waste.

But there are more than one ways to skin a cat. One way of getting closer to the target for the percentage of renewables used in heating is to work on the demand side. Over the years, the British Government has announced various schemes to stimulate improvements in insulation, thus reducing the amount of fuel needed to maintain a given temperature.

The National Audit Office report of April 2016 on two of these schemes noted that the UK’s 27 million homes are responsible for more than a quarter of the country’s total energy demand and greenhouse gas emissions. Due to the age and design of many buildings, the UK’s housing stock is among the least energy-efficient in Europe. Thus occupants of inefficient homes have to use more energy to keep their home warm, leading to higher bills and harm to the environment.

There are several ways to make homes more energy-efficient and thus reduce emissions. These range from relatively cheap measures, such as loft insulation, to more expensive measures, such as refitting walls with a more energy-efficient structure. The NAO report concluded that the Green Deal and Energy Company Obligation schemes sponsored by the (then) Dept. of Energy and Climate Change did not provide value for money, even though they expected to show a total saving in carbon dioxide emissions of 34.1 millions of tonnes over their lifetime (ending March 2017).