On 20 January Dr Matthew Trewhella, managing director of Kensa Contracting, a division of the KenslaGroup, gave a stimulating talk on the past, present and future of heat pumps as part of the Oxford Energy series. Kensa is based near Truro and claims to be the only British manufacturer of ground source heat pumps. Dr Trewhella was an astrophysicist in California until he concluded that it was not much use studying ancient stars if our planet was going to become uninhabitable due to climate change.

Heat pumps need to get some heat from an external source before it is “pumped” up to the temperature desired by a pump inside a building. The source of heat can be the air or the ground (or, in some cases, flowing water). Kensa provides ground source heat pumps, which are usually considered to be only feasible for new or renovated houses with a sufficiently large garden to allow the laying of an array of pipes or the drilling of a few vertical boreholes.

Dr Trewhella showed how outdated this notion was. He and his colleagues have introduced two concepts by which ground source heat pumps can be more widely used, both based on advantages from economies of scale. The first is the Shared Ground Loop Array (SGLA). As shown below this is an array that is shared between several households, each of which has its own heat pump. In Kensa’s vision this could, for example, be drilled beneath the road outside a row of houses or a block of flats and provided rather like gas is provided today. The array will be much larger than a single array but the cost per household will be less because once set up the cost of drilling extra footage is relatively small. 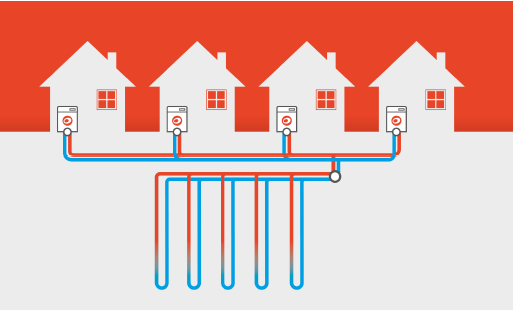 There are several advantages compared with the alternatives of air source heat pumps and district heating. Unlike the latter the temperature of the water circulating in the arrays is close to ground temperature and does not need special insulation (indeed inside the building it will benefit by receiving heat from the building). Each household is also largely independent: owners can still choose the heat pump they want and pay their own electricity bill. In a district heating system, a wasteful owner affects everyone, but here the effect is minimal. As with all heat pumps there is the possibility of reversing the system so as to cool in summer.

Unlike an air source the ground source has no large noisy unsightly fan outside the building, and it is more efficient.

Kensa have installed many SGLAs. For every five heat pumps built by the company four have been installed with an SGLA. The largest project, in Yorkshire, involved several SGLAs spread over a large area servicing a thousand homes.

The second concept is Networked Heat Pumps, essentially sharing heat on a large scale through a network of pipes between different building types, each of which would be heated or cooled by heat pumps. For example, at some times of day offices will need cooling rather than heating. Rather than putting this heat back into the ground through its ground loop array, it would be sent to the ground loops of residences and other buildings that might need heating.

This type of synergy could also be applied to solar panels. The latter are more efficient when cold but generate heat when working. In winter this heat could be captured and put in the ground or used directly to heat the liquid in the ground loop.

All these schemes assume that heat pumps are a cost-effective source of heat even in existing homes that may need extensive alterations. Dr Trewhella minimises concerns about the size of radiator and additional insulation needed: the heat pump may just need to run more often. The cost can be brought down significantly by SGLAs and networking, and by reaching sufficient production volumes to achieve economies of scale. Smart operation (generating heat when electricity prices are low) can reduce the cost further.

Dr Trewhella does not expect major improvements in the heat pumps themselves but he does expect his concepts to improve the overall efficiency. The latter is measured by the amount of heat energy created divided by the amount of electrical energy input (the Coefficient of Performance or COP). Whereas an air source heat pump has a COP of 2 to 3 he expects that future ground loop systems to reach 5 to 6. This should indeed make the running costs much less than natural gas and be very attractive. But will consumers and governments be sufficiently convinced to invest in heat pumps on a large scale?