Water in abandoned mines holds heat, but how useful is it?

The water in abandoned coal mines has received increasing interest as a source of residential and commercial heating. There are certainly many such mines in the UK and most of them will contain significant volumes of tepid water, but how much useful heat can be delivered?

Two projects at Gateshead and Seaham, in the North East, are well advanced. Using existing installations, they will tap water in the mines whose temperature lies in the range of 17o to 20oC. This in itself is not hot enough to heat buildings, let alone provide hot water for baths or showers, but is a very good input to a heat pump. Heat pumps normally get heat from the air (air-source) or by putting pipes into the ground (ground-source).

Both have limitations. Large volumes of air can be blown over the air-source heat exchanger, but the amount of heat per unit volume of air is small, particularly on a winter’s day. There is more heat in the ground, but to increase the amount removed means increasing the amount of piping, to the point that it becomes financially unacceptable.

Mine water, on the other hand, exists in large volumes in existing mine workings from which it can be withdrawn extremely rapidly, enough to support a very large heat pump or many small ones. Once used the water will normally be returned to another part of the mine where the earth will be slowly heat it up again. This cycle takes advantage of the work of earlier generations of coal miners who have created the underground caverns to store the water and the shafts to bring it to surface. 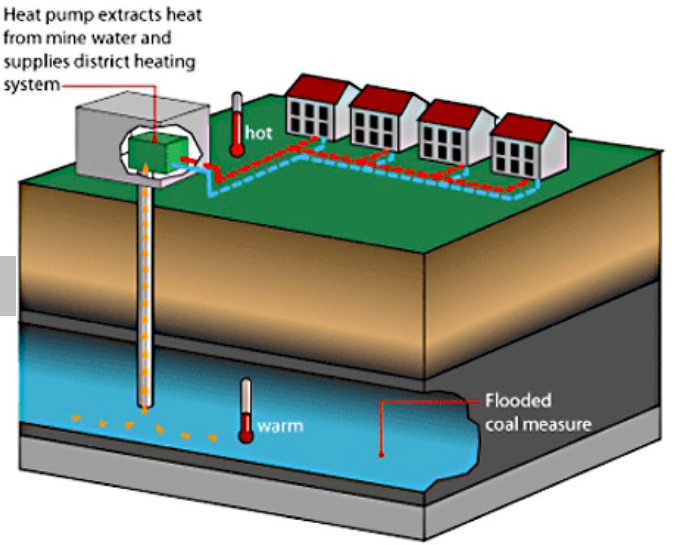 Mine water being used in a district heating project in the Netherlands (https://inhabitat.com/heerlen-minewater-project/district-heating/)

Given the number of old coal mines under the UK, one might hope that mine water would offer a major improvement to the decarbonisation of heating. The problem is that heat cannot be transported easily or cheaply. Unless the pipes are expensively insulated the further the water has to be transported the sooner it will reach the ambient temperature, at which point there is no advantage to using it rather than lake water.

Although mine water could be piped to a heat pump in each residence, it will almost certainly be more cost-effective to have a district heating scheme with a big central heat pump feeding hot water to buildings. In either case a large amount of insulated piping must be installed both inside and outside buildings. This can be done easily for new developments but is very difficult in existing ones. (Interestingly, many blocks of flats built in, say, the thirties had internal piping from a central oil or coal-fired boiler, but they were abandoned with the advent of gas. Alas, they are unlikely to be still serviceable.)

Thus, the use of mine water will be limited to new developments near old mines. The Gateshead project will provide hot water for an existing district heating scheme, while the Seaham project is intended to support a new development (South Seaham Garden Village) with 1500 houses, school and other communal buildings. The mine is expected to deliver 150 litres per second of water at 19/20oC which two large heat pumps will boost to 60/65oC. The timing on both projects is unclear.

More generally the British Geological Survey (BGS) has done considerable work examining mine water across the UK in terms of the temperature and depth of the water, its expected productivity and possible restrictions. The result is a map of shallow geothermal energy.

Strictly speaking geothermal energy is energy derived from the earth’s core, but near the surface the temperature of the ground is controlled by the sun. There is of course no absolute dividing line between the two, but when counting energy reserves the UK considers the heat from 500m downwards to be deep geothermal energy. That above 200m is normally referred to as ground-source energy or shallow geothermal energy.

Whatever the terminology, mine water can be a valuable adjunct to heat pumps in many parts of the UK, but one that is largely limited to new developments close to old mines.