Hydrogen Safety: the results of H21’s Phase 1 study of hydrogen in the gas network

In May the H21 project released its Phase 1 report on the safety of replacing natural gas (methane) by hydrogen for residential heating. The hydrogen molecule is much smaller than methane so that there are reasons to fear that hydrogen might leak more easily from the gas network. On the other hand, the energy per unit volume of hydrogen is somewhat less than that of methane in normal conditions. So, leaving aside images of hydrogen bombs, is it more dangerous?

The solution is to make experiments. H21 is a consortium of gas industry companies led by the Northern Gas Network which since 2017 has been examining the feasibility of converting the gas network to hydrogen. Phase 1a of the project concentrated on examining the leakage rates of hydrogen compared with methane from pipes and other components of the network. Phase 1b compared the consequences of a leak, for example whether hydrogen ignites more easily. These results are used to update the Quantitative Risk Assessment (QRA), which essentially predicts the potential loss of life caused by leaks in the gas network.

In Phase 1a, 215 sections of pipe with joints were tested for leaks using either hydrogen or methane. Most of these pipes were made of iron and had been in the ground and in use from as early as 1920. They had been removed as part of the Iron Mains Replacement Programme (IMRP), which was started in 2002 with the goal of replacing by 2032 all cast iron pipes in the UK that lie within 30 metres of property by polyethylene pipes.

Of the 215 sections, 41 had measurable leaks. Most significantly none of the polyethylene pipes leaked and all the pipes that leaked hydrogen also leaked with methane. As expected, the volume of hydrogen lost was higher, by up to a factor of two, but the energy lost was slightly less with hydrogen.

Phase 1b looked at the effect of both small and large leaks underground and in specially constructed houses full of sensors to track gas movement and concentration. The ability of common electrical equipment to ignite the hydrogen was tested. The overall conclusion was that the risks from fires are lower with hydrogen than methane, but the risks from explosions are higher. This is because hydrogen combusts much more rapidly than methane, too fast for the weakest components in an enclosure to give way and release the pressure.

These results are fed into the QRA, which assigns probabilities to each of the steps that might lead to a loss of life and, taking into account the extent of the GB network, calculates the potential loss of life per year (PLL). Such a model already exists for methane, and is found to be conservative, predicting five times the PLL than actually occurred between 2010 and 2019 for certain cases.

With hydrogen the PLL is higher, basically because the damage from an explosion is calculated to be higher than that from a fire. The plot below compares the PLL for methane in 2020 with the PLL in 2032 assuming the whole network has been converted to hydrogen and the current IMRP has been completed. Since the overwhelming cause of leaks is metal pipes, the plot shows the effect of also replacing pipes that are made of steel or non-cast iron to different extents. 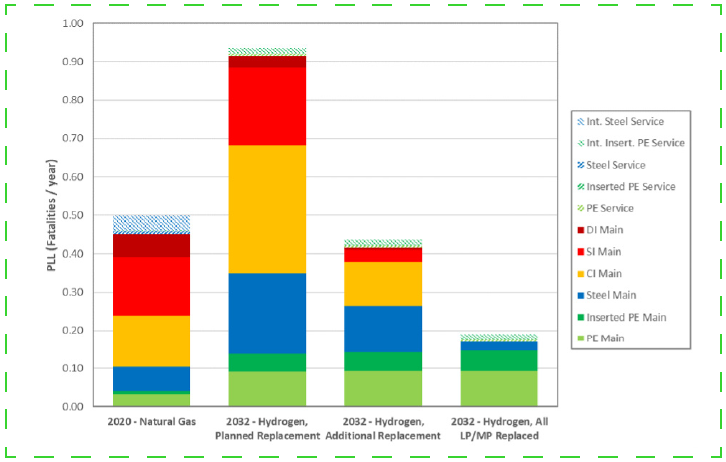 However, there are some serious limitations to the data shown above. First, it only applies to leaks before the emergency control valve (ECV) that sits upstream next to the gas meter, which normally means before it enters the house. Risks after the ECV will be included in the QRA in Phase 2. One would expect them to increase the PLL considerably. Also, some possible causes of hydrogen ignition, such as static electricity on a person’s clothing and sparking caused by a shovel striking a stone or a pipe, have not yet been fully examined.

Whatever the results show the managers of the gas network recognize that public opinion is critical to their plans. For this reason, Phase 1 included a social science study which examined people’s attitudes through interviews and an on-line survey. Somewhat surprisingly these showed that safety was not a major concern (people apparently rely on the network companies to make sure hydrogen is safe). Otherwise, the responses aligned largely with people’s attitude to climate change. Fully 30 per cent were disinterested in the conversion while 12 per cent rejected it and 10 per cent were unconvinced, leaving 48 per cent accepting of or positive about the change.

These results could well be different as the time of conversion approaches. It would need only one hydrogen accident or a negative press to cause a large swing in opinion.

To sum up, studies so far show that hydrogen is indeed somewhat more dangerous than methane, but measures can be taken to make the network safer than today. However, the necessary studies are far from complete. We must await Phase 2 of H21’s project, which will test hydrogen on an existing but unused network, and on experiments done elsewhere, notably from the Hy4Heat project sponsored by the DBEIS.