The government is reported to be considering an incentive scheme to encourage home owners to replace their gas boilers with heat pumps. A sum of £4000 was floated, recently increased to £7000. Even so it is unlikely that many owners will take up the offer.

The problem is not just that heat pumps are more expensive than gas boilers but that they are worse at producing high temperature water. As a result, radiators must be expanded and homes better insulated if the same ambient temperature is to be maintained. Tanks must be installed for hot water, and space found for the external part of the heat pump. One study found that the total cost of the change was £10,800 versus £3000 for a new gas boiler (Greenbarrel, April 2020).

On top of that the cost of the electricity supply for the heat pump is almost double that of the gas for the boiler, at current retail prices. Even if the wholesale price of renewable electricity eventually comes down, there will be an additional cost for electricity storage given that heating is seasonal.

But none of this gets to the heart of the matter, which is that people will not make major changes to their living space without strong evidence that it is worthwhile. There are too few case studies of the replacement of boilers with heat pumps in existing properties. This contrasts unfavourably with the work of the gas networks to prove the safety of hydrogen, even building typical UK houses exclusively for tests. The heat pump industry needs to commission studies showing how heat pumps would be introduced into all types of property from flats to country houses. 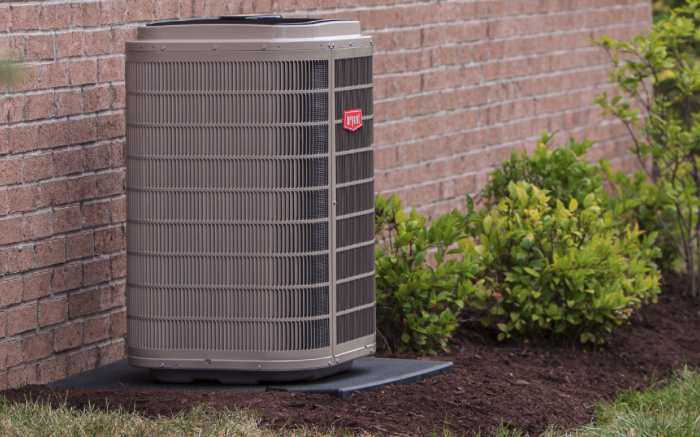 The external unit of an air source heat pump (www.gvec.org)

In the meantime, the report released in April 2021 by the Climate Change Committee gives a better sense of how the decarbonisation of heating might take place. It considers several pathways, depending mainly on how quickly the UK converts to renewable electricity. In the Balanced Pathway, considered to be the most likely, 5.5 million existing homes will eventually be converted to district heating, 2 million to electric heating and 21 million to heat pumps. However, of the latter 5 million will be hybrid with additional heat being provided by electricity or hydrogen. All new buildings are assumed to be low carbon from 2025 if off-grid, and 2033 if on-grid.

The report divides the existing 28.5 million UK homes in several different ways. The first is by the type of building – detached house, semi-detached, terrace or flat – and the “spatial constraints” measured by average area per room. The second is on or off grid. The third is whether fuel poor or not (more subsidies being needed for the former), and finally the type of ownership, because it is thought that more pressure can be put on landlords and local councils than owner occupiers. For each group the cost of the optimum solution is calculated.

Interestingly very few heat pumps are predicted to be installed in existing on-grid homes before 2026.  This is roughly the date on which the report expects a decision to be made on distributing hydrogen through the gas network. Even then the Balanced Scenario assumes the hydrogen network will only grow slowly around industrial clusters. Other scenarios predict a wider usage.

The report also calculates the Levelized Cost of Heating (LCOH) in £ per kWh for each type of heat generation envisaged and their combinations: air-source and ground-source heat pumps, electricity, hydrogen, biofuels and solar thermal. The LCOH takes into account the initial cost plus the running cost, lifetime and discount rate. Rather surprisingly the variation is small, from 0.096 to 0.124, ignoring two outliers, but including fully electric heating.

These numbers are of course highly dependent on the assumptions made about future electricity and hydrogen costs, and heat pump efficiency. However they are significantly above the £0.05 per kWh that is at the top end of what we are paying for gas today and represents an extra payment of about £700 per year for the average household[1].

They also suggest that purely electric heating might be more popular by offering minimal disruption for a similar overall cost and assuming no incentives for heat pumps. Two technical advances might help this. One is extensive use of heat batteries which, like current storage heaters, would use special materials to store heat generated during periods of low electrical demand, and hence price, and release it when needed. They are essentially a more compact form of the hot water tank.

The second advance is the microwave boiler which only uses electricity but generates hot water immediately and can be fitted in the same space as a gas boiler (Greenbarrel, May 2021). No hot water tanks or other internal changes would be needed, although it will always be true that the better the home is insulated the lower will be the heating bills. If this idea works out and if the future price of electricity is as predicted in the report this solution could be appealing. Unfortunately this option is not considered, probably because it emerged too late to be taken into account.

The Climate Change Committee’s report is a welcome analysis of the future of residential heating. However, if this future is to be mainly heat pumps then the industry needs to back it up with practical demonstrations by an independent body showing how each type of property can be decarbonised and at what cost and inconvenience. Only then will the public be persuaded.

[1] This of course ignores the cost of the gas boiler because it is already installed. For a new boiler, assuming a cost of £3000, a discount rate of 5% and a lifetime of 10 years the LCOH would be £0.08 per kWh.