The most counter-intuitive of all the types of renewable energy is probably the exploitation of the heat to be found at relatively shallow depths in the earth. While it appears natural to think of harnessing water, the wind, the heat from the sun, or even the heat from volcanoes, a certain leap of the imagination is needed to realize that even on a cold day it is possible to profit from the heat just below the surface of the earth. Yet, even a few metres down, the soil temperature remains all year at a fairly constant 10 to 20 degrees Celsius, whatever the seasonal changes in air temperature. (Caves, or even cellars, take advantage of this.)

But the way in which this situation is exploited is also unusual in that it is a use of renewables for heating, not for power. The machine which enables this heat to be utilised is called a ground source heat pump, which relies on a series of connected pipes buried in the ground next to a building. As water is circulated through the pipes it absorbs the heat of the ground and transfers it to the building. Interestingly, in summer, the same circuits can be used to abstract heat from a building and cool it down. 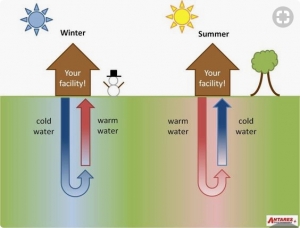 By comparison with other forms of geothermal power, ground source heat has one great advantage- it is accessible almost everywhere. It is not dependent on favourable geology. So, for the UK, it is almost the only geothermal game in town. One thousand square feet of floor space needs about a six kilowatt heat pump, at ten metres of looped pipe in the ground for each kilowatt of power. Obviously excavation for this pipe network is far easier when the house is being built. The pipe network accounts for most of the overall cost and it is estimated that the pay-back time for a ground source heat pump system for the average new house is between six and seven years. The operation is more problematic for an existing house, unless good insulation has already been incorporated into the building design.

For what are perhaps obvious reasons, there are not a lot of stand-alone UK producers of ground source pumps. Worcester was an independent British  engineering company before it was absorbed into the (German) Bosch Group in 1992 and another prominent group, Daikin, is an offshoot of the large Japanese air-conditioning group of the same name. The Truro-based Kensa Heat Pumps claims to be the UK market leader, manufacturing and supplying the widest range of ground source heat pumps specifically engineered for British properties.

At the risk of causing confusion, it should be pointed out that there is also a another type of heat pump, the so-called “air source” heat pump which, as its name suggests, utilises a rather different technology, extracting heat from the outside air in the same way that a fridge extracts heat from its inside and using the heat for underfloor heating or hot water as well as reducing carbon emissions. It can get heat from the air even when the temperature is as low as -15° C

Both sorts of heat pump need electricity to run, but the heat they extract from the ground, air, or water is constantly being renewed naturally. From the energy point of view the attractions are clear. But the real determinant of the speed of take-up of heat pumps will inevitably be future trends in the price of oil. Heat pump manufacturers are not the only people who would like to be in a position to solve that riddle.