Geothermal I: Renewable energy from within the earth

In these days of heightened awareness of de-carbonisation and global warming it is interesting to note that the world is probably only tapping six or maybe seven per cent of all the global geothermal potential. Geothermal, derived from the Greek words for Earth and Heat, covers the various methods of harnessing the heat of the Earth, which at its molten centre has a temperature of well over 6000 degrees Celsius. In general, the temperature of the earth diminishes steadily as distance from the centre increases, but in volcanic areas hot, larva-like rock can occur very close to the surface. So historically, the earliest exploiters of geothermal energy were those who lived in volcanic areas, e g .Iceland, or New Zealand, using naturally occurring hot-springs and steam vents for cooking, heating and, of course, for hot therapeutic baths.

One major use of geothermal energy is for generating power. In early 2016, one estimate, was that total world capacity was around 13.3 Gigawatts (GW) of which US installed capacity represented some 3.7 GW, while the Philippines came next with just over 1.9 GW. Early geothermal power plants were commissioned in New Zealand starting in 1958 and in northern California in 1960. But capacity is concentrated in a small number of countries because it is geology which determines the location of geothermal power facilities. The essential is to be able to drill into hot rock structures relatively close to the surface, say two or three miles down. Several different approaches can then be employed. 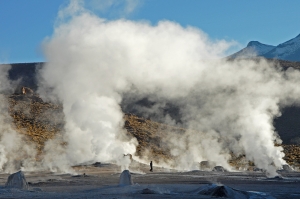 Sometimes the drill reaches a reservoir of naturally occurring “dry” steam, which can be used to “direct drive” turbines. The steam cools back to water and is then injected back down the well, both to be re-heated and to maintain the pressure. This is the rarest form of geothermal power, though the first commercial geothermal plant in the world, built in Larderello, Italy, just before the First World War was “direct drive”. Alternatively, the reservoir may contain very hot water which can be transformed into steam on the surface. Sometimes water has to be pumped down an injection shaft into the super-heated rocks below, recovered via a production shaft and then turned into steam. Whichever of these methods is used, the steam or the water needs to be purified to remove those particles which would otherwise act on the turbines like “fur” on a kettle.

When the water temperature is too low to produce steam spontaneously, then the water can be passed through a heat exchanger, where its heat is transferred to a second liquid, such as isopentene which boils at a lower temperature than water. The heated binary liquid turns to vapour which drives the turbines. It then cools, turns back into liquid and begins the whole circuit again, without producing any emissions at all.

Geothermal energy from natural hot water is also used for space heating for buildings or even whole districts. Again, the hot water is passed through a heat exchanger where its heat is transferred to clean water which is then piped to a series of buildings. The world’s largest geothermal district heating system is in Reykjavik, Iceland, while in France up to 200,000 houses have been heated in this way since the 1960s. Even the UK, which otherwise has few geothermal “hot spots”, boasts a district heating project in Southampton, partly fuelled by underground hot brine from a geothermal well. The well is more than a mile deep and the temperature of the water at source is 76 degrees Celsius giving a significant differential that can be used to warm fresh water. After passing through the heat exchanger the cooled brine is discharged into the sea at about 28 degrees Celsius, while the warmed clean water circulates through a number of Southampton’s larger buildings.