Having written recently about IGas Energy’s conventional oil and gas activities, in a second article we now look at fracking for shale gas in the UK and the company’s role as a player in the activities.

Of course, for many IGas investors the real interest is in the potential of the shale acreage which the company holds. At the moment there is nothing in the share price for the shale upside. There are few publicly quoted companies with extensive shale holdings in the UK and IGas is probably the most attractive. The company holds around one million acres in several licences in Bowland shale basins in the Midlands and North of England which could harbour shale gas. Early surveys estimate that the company’s acreage could hold 80 trillion cubic feet (tcf) of gas-initially-in-place.

Given that the UK consumes under 4 tcf of gas a year, even with low recovery rates of, say, 10 per cent IGas could produce more than two years’ worth of gas for the country. IGas has assembled a war chest of £183m through three large groups INEOS, Total and Engie investing in IGas’s assets (not its equity).

On November 1, 2017 INEOS, whose huge Grangemouth refining and petrochemicals complex accounts for 4 per cent of Scotland’s GDP agreed to buy out Total’s interests in five licences without any financial change to IGas and INEOS also assumed Total’s carry obligations of £183m. Earlier INEOS also bought out some of Engie’s interests. So there is enough capital expenditure (capex) needed for drilling waiting to be released.

The problem has been getting permission to drill. Despite the UK government’s enthusiasm for fracking the process has become deeply controversial in the UK, This is because of stories originating in the US that claimed fracking could damage the environment and cause earthquakes. 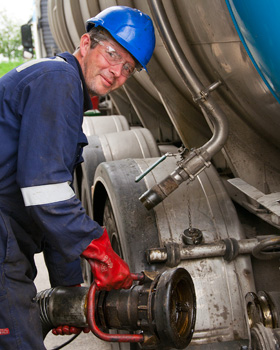 IGas gets ready for its fracking operations, photo www.igasplc.com

When the privately-owned Cuadrilla company fracked in two wells close to Blackpool in the north-east of England in 2011 they caused small tremors. This seemed to confirm the US concerns; this led to demonstrations here which in turn led to a fracking ban.

The ban was lifted in 2014 but since then the so-called shale gas revolution which was to transform the UK’s power mix and enhance its security of energy supply has stalled. Greenbarrel asked two industry professionals why they thought it had stalled and whether and when shale gas explorations will take off.

Andy Morrison had a long career with Shell, became CEO of two small cap oil and gas exploration and production companies (E&Ps), Zeta Petroleum and Silvermere Energy and is now chairman of Spinnaker Opportunities, a cash shell looking for investment openings in oil and gas groups.

He said: “I am not a specialist in shale. But I think there are three factors that have held shale exploitation back. First, with the collapse of the oil price companies have had to think seriously about drilling exploration wells of any kind when money is so tight.

“Second, is the fact that local councils (and they are authorities which are responsible for granting planning permission for onshore oil and gas drilling) seem to have become indecisive about giving the go-ahead for wells because of the widespread public opposition to fracking.

“Third, given the splits in the government about Brexit and other things they do not want to revive any more divisive issues like fracking just now.”

Mark Abbott is CEO of Egdon Resources a small oil gas E & P, which has interests in a number of IGas’s licences. He says: “It probably is true that because of the divisions the government is not being as robust as it might be in promoting shale extraction. But fracking is now happening.”

“Momentum in shale activity has increased. Third Energy will be shortly fracking at its well at Ryedale in Yorkshire. Cuadrilla has begun drilling at its Preston New Road site in Lancashire. We (Egdon has a 14.5 interest in these licences) are progressing three permissions in North Nottinghamshire and expect to be drilling in early 2018.”

There are a number of other planning applications in train. IGas has said the industry expects to have over six operators drilling or flowing wells soon. We shall soon find out whether it does.

By Stewart Dalby|2017-12-01T12:46:16+00:00December 1st, 2017|Igas Energy Plc|Comments Off on IGas Energy eagerly anticipates the resumption of its stalled fracking-for-gas programme in the UK