Oxford PV is a private company, originally a spin-off from Oxford University, with world-class expertise in the use of perovskite photovoltaics and solar cells. The firm’s web-site states “its low-cost, highly efficient photovoltaic technology, when integrated with standard silicon solar cells, will dramatically improve performance”. Their tandem solar cells will deliver significantly additional power per square metre, which is crucial for delivering more renewable electricity at an affordable price.

Increased use of solar is vital for decarbonising the world’s energy. For even a modest increase could prove transformational. Solar needs to make a more substantial contribution if the world is to deliver on the Paris commitments and there are those who predict that solar will account for half of global electricity generation by 2050.

Perovskite is a calcium titanium oxide mineral, with the chemical formula CaTiO3. The mineral was discovered in the Russian Urals by Gustav Rose in 1839 and is named after Russian mineralogist Lev Perovski (1792–1856 ). Strictly speaking, Oxford PV use a synthetic material, with a perovskite structure. 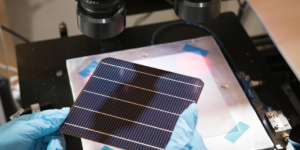 Their technology involves coating ordinary silicon solar cells with a thin film of perovskite material to better utilise photons across the solar spectrum. The synthetic perovskite is affordable, sustainable, and eventually could replace silicon entirely – thirty-five kilograms of perovskite generates the same amount of power as seven tons of silicon.

This cell has been proved independently to convert 29.5 per cent of solar energy into electricity. Standard silicon cells used on millions of homes globally have an average conversion rate of between 15 and 20 per cent.

But the completion of the build-out has produced a complication. In 2019, as part of the development process, the company signed a strategic, exclusive deal with Swiss technology developer Meyer Burger for manufacturing equipment. However, since then Meyer Burger has changed direction and has also built a plant for solar cell production that opened very recently. (It is relevant that in May 2020 Meyer Burger cancelled deals with other module makers that used its equipment.)

The recent completion of the factory has led to Oxford PV unilaterally terminating the deal with Meyer who say it is exploring its legal options, not least because at the last count it was the largest single shareholder in Oxford PV with 19.5 per cent. Other supporters include Oxford University Innovation, Goldwind, the University of Oxford, Innovate UK, the European Investment Bank (EIB), Legal & General, the Engineering and Physical Sciences Research Council (EPSRC) and Equinor (the former Norwegian Oil company, Statoil).

The least one can say is that Oxford PVs recent action has not improved the future prospects for a European solar industry.