Varun Sivaram is worried that solar energy might follow the same path as nuclear: initial enthusiasm followed by disillusion caused, in nuclear’s case, by lack of social acceptance and cost. As a Rhodes scholar who researched perovskite cells and with degrees from Stanford in both engineering physics and international relations he is well placed to provide insights on the subject. His scope is broad, looking world-wide at energy requirements in 2050 and beyond for which actions are required now.

Taming the Sun is divided into four main sections. In the first he shows why the world might not be able to increase the contribution of solar energy from 2 per cent today to 30 per cent in 2050, the proportion he suggests is necessary to meet the Paris agreement on climate change. The remaining sections discuss the potential obstacles grouped in three categories: insufficient financing, lack of technological improvement, and inadequate systems and policies. Each is discussed in detail with useful short summaries.

On the surface everything is going well: the cost of solar PV panels continues to decrease and more countries are committing to ambitious goals. However in the most mature markets such as Germany and Italy the share from solar has plateaued out at less than 10 per cent. And then there is value deflation, the problem that the bigger the solar contribution the less value it has.

This is already observed in California where the addition of a new solar panel has no value for the state’s energy system. There may be value for an individual householder, but not for the grid operator, since there is already more than enough daytime power. Then as the sun goes down the operator has to add 10GW of power from other sources in a few hours to make up for the lack of solar energy. This puts a large strain on the system and is expensive. Cost inflation is the other side of the coin to value deflation.

The usual answer is batteries, which is described as “no silver bullet” because the quantities required are very large and the cost high. For example, spreading out the solar energy acquired in California in the day over twenty-four hours would require some three million Tesla’s Powerwall batteries, and that is just for the current level of solar generation and ignores longer term fluctuations due to weather and the seasons. 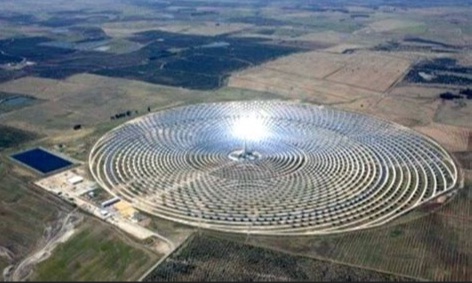 In the short term the author favours a mix of PV and concentrated solar power (CSP, the use of mirrors to focus the sun’s rays typically onto a tank of water at the top of a tower). The steam produced can be stored more economically than batteries, but still only for a matter of hours. Of course there is no doubt that nuclear plants and gas turbines will still be needed in 2050, although hopefully the latter will have carbon capture and storage. Longer-term storage solutions are discussed including hydrogen and photo-electrochemical systems that emulate plants.

The need for more research and development is a constant theme. In the author’s opinion solar panels need to be an order of magnitude cheaper and simpler to manufacture than today’s silicon cells. They also need to be more efficient, flexible, available in different colours and able to be printed like a newspaper. New materials are needed but the spectacular success of silicon is actually a barrier to progress, because it is so widespread and because new technologies cannot match the price initially.

One potential solution is perovskite, a mineral that offers many of the desired characteristics. It also takes energy from a different part of the solar spectrum than silicon, so adding a sheet of perovskite to a silicon panel not only increases the power output but also provides an easier way to enter the market. Development of perovskites or other materials takes substantial funding but funding devoted to energy is generally low. For example the US Federal government has for years spent less than 2 per cent of its R&D funding on energy, with space, health and defence receiving far more.

Financing generally is a concern because even if the cost of solar panels is reduced dramatically it is still only one third of the cost of a utility-scale array. It is not clear where the trillions needed will come from. “Yield Co’s” – investment funds that own solar farms and provide a reasonable rate of return from the power sold – should be ideal for investors like pension funds looking for a safe, steady income, but they suffered badly in the US when the oil price dropped in 2015 and have not taken off there. In the UK they are reasonably successful but tend to buy existing farms rather than financing new ones. Somewhat wistfully the author looks at the ease with which large oil companies raise money for risky development projects and hopes that some can be diverted to solar.

Finally, there is the whole system of energy management and distribution, from grid lines and power stations through grid management, energy pricing and public policy. Most of these require major modification and investment if solar energy is to succeed. The book is about solar energy, but of course many of the issues, particularly in this section, apply equally to other intermittent renewable sources such as wind.

Taming the Sun is an abundant source of ideas and with nearly 600 references has enough information for the most ardent enthusiast. The global sweep means that local factors tend to be brushed over. Writing about laying solar panels like a carpet over the land seems unrealistic in crowded northern Europe. In fact the issue of where to put them is not discussed directly, although this is one area where social acceptance may prove important.  Could this be an Achilles heel? Two things are certain: it will not be if Sivaram has anything to do with it, and we can look forward to hearing more from him.