Efficiency is often the most highly considered factor for a solar cell amongst the research community. It is defined as the electrical power that a solar cell module outputs compared to the solar influx of power that falls on that module, expressed as a percentage. Recently, perovskites have exploded onto the scene, going from 3.8 per cent efficiency as a prototype in 2009 to 25.2 per cent only a decade later. However, the initial prototype held the same flaw that still plagues perovskites to this day – it was only stable for a few minutes. Recent designs have greatly improved upon this but are still short of the 25-year guarantee that is common commercially.

Whilst greater efficiency is needed to reduce the cost of solar power, it is not enough on its own. Increasing system lifetime through greater system reliability and lower degradation rates is equally important.

Calculations from the National Renewable Energy Laboratory (NREL) [1] in the USA looked at how the efficiency of a solar cell module and the price per watt of the power it produces affect the overall cost. Combined with other “balance-of-system costs”, such as labour and supporting hardware, NREL was able to calculate how long a given system would need to run for to stay price-competitive with conventional energy generation.

Looking at it from a different perspective, even if the module was completely free but only lasted for 10 years, it would have to be an incredible 29 per cent efficient to produce price competitive energy due to other costs involved.

Current studies suggest that the efficiency of solar modules degrade by 0.75 per cent per year compound on average. However, modern data is skewed by long term studies on older modules only now reporting their findings. Shorter studies on the most recent top performing modules find a degradation rate closer to 0.2 per cent per year. These studies are less reliable though, because they need to artificially speed up the degradation of the cell then attempt to extrapolate that data to real-world conditions.

A review in 2016 [2] gathered degradation data from long- and short-term studies, which has been summarised in the chart below. The categories refer to the different types of material that the active part of the solar cell is made from. 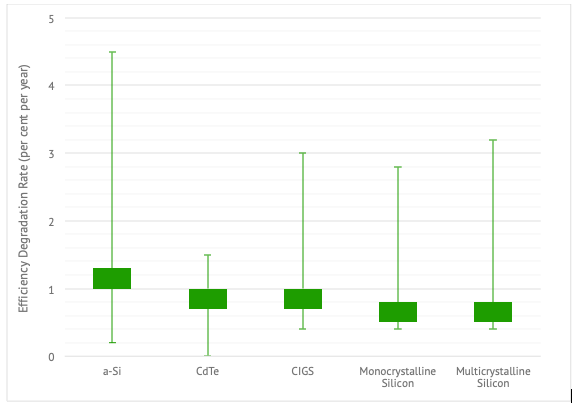 Chart showing the efficiency degradation rates of various commercial modules available in 2015, separated into the material classes: amorphous silicon (a-Si), cadmium telluride (CdTe), copper indium gallium diselenide (CIGS), and mono- or multi-crystalline silicon. The boxes represent the range over which 95 per cent of the data fall, the whiskers show the full data range. Based on data from [2]

Unsurprisingly, the cheap amorphous silicon (a-Si) fares the worst, but these generally aren’t used for large scale power generation due to a low overall efficiency. The other classes all have similar average degradation rates, although the range of cadmium telluride (CdTe) devices is more compact.

Factors outside of the material a solar cell is made from also affect longevity. Browning of surface coatings over time is a major issue and temperature and weatherproofing all make an impact. Recently it has been discovered that shadows cast by workers, even during installation, can produce large degrading effects.

Of course, there are many other factors that affect the cost of solar-generated electricity. For example, the same study by NREL suggests that halving the labour and supporting hardware costs would translate to a 0.10 USD per watt saving overall. Technologies such as solar concentrators or modules that tilt to follow the sun can increase the power output, and smarter use or storage can reduce energy wastage. It is apparent, however, that longevity is a major limiting factor in solar energy’s push to become price competitive, and perhaps one that should receive more attention going forwards.