As discussed in theGreenbarrel article of January 14, the recent government energy white paper restates the Prime Minister’s 10-point plan of reaching an offshore wind capacity of 40GW by 2030. What is the chance of achieving this?

There are many steps in constructing an offshore wind farm. The process starts with the Crown Estate and the Crown Estate Scotland, who together manage the seabed around the UK on behalf of the Crown. The Crown owns almost all of the UK’s seabed from mean low water out to twelve nautical miles, but has rights out to 200 nautical miles or as agreed with neighbouring nations in the early sixties. These rights include the seabed surface and a short distance below it (excluding, for example, oil and gas reservoirs). Thus any wind farm operator needs to lease an area of seabed from the Estates not only for the tower, or for its anchors in the case of a floating wind farm, but also for cables and pipes. 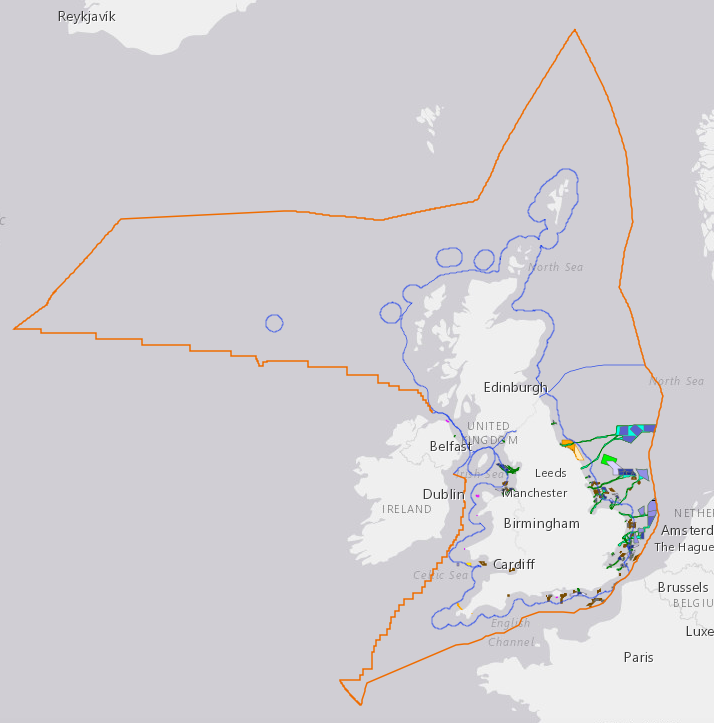 Map showing the total area managed by the Crown Estates (within the orange line). The coloured shapes show the areas currently leased for non-wind purposes and for wind from Round 3 and earlier, excluding Scotland. From https://thecrownestate.maps.arcgis.com

One might expect the two Crown Estates to be rather fusty institutions concerned with old buildings and large farmlands, but although the revenue from offshore assets is only 14 per cent of total revenue, they take their job seriously. Either internally or through contractors they produce studies such as the suitability of the seabed for different types of installation and they control the process of auctioning and managing leases.

The Crown Estate implements the latter through a series of Offshore Leasing Rounds roughly every ten years. The current Round 4 was kicked off in late 2019 to provide leases for new wind farms for a surprisingly low total capacity of 7GW. In 2020 initial bids were received and checked to make sure they passed the minimum financial, technical and legal criteria. They will shortly enter the actual bidding process in which bidders offer to build a certain MW of capacity and to pay an annual fee in terms of £ per MW[1]. The winning bids will then enter a process of Habitat Regulation Assessment after which, if all goes well, lease options will be awarded in early 2022.

The developer is then allowed ten years in which to design his project, apply for a Contract for Difference with the government (assuming he wants one), obtain further agreements related to power transmission and the environment, and start procurement. After reaching this stage he will be awarded the lease for a further sixty years with a twenty-five year break clause.

Crown Estate estimate the length of the complete process up to start of operations as follows: time to obtain lease option (1-2 years); development and consenting (5 years); procurement and CfD (2 years); construction (3 years), for a total of 11 to 12 years.

Thus, in this scenario, a project must have already obtained a lease option if it is to be operating by 2030. At first glace this makes the goal of 40GW by 2030 seem impossible. But last year Will Apps, Head of the Crown Estate Energy Development, pointed out that the UK had 9GW operating and 10GW committed, i.e. under construction, in line with the Energy White paper. To this he added 16GW “under-development” which means that the project had obtained a lease option from Round 3, plus a further 7GW from Round 4, and 3GW where extensions are being granted to Round 3 options, to give a total of 45GW, operating or at some stage of the process.

This was without new input from Scotland. Crown Estate Scotland has recently launched its own Offshore Leasing Round for a further 10GW, with the deadline of 31 March 2021 for applications. The UK should therefore have 55GW somewhere in the pipeline by 2023.

However some of the projects under development will be cancelled or delayed. Sixty per cent of these projects will need to be in operation by 2030 to reach a true capacity of 40GW at that time. How many will actually do so is a guess. On past performance it seems possible, but with the large volumes involved there may be bottlenecks in the availability of hardware (turbines, towers), or equipment and people for installation. What is likely is that in 2030 the government of the day will claim as much of the capacity in the pipeline as necessary to be able to say that it met its target.

[1]In Scotland the fee is £1.07 per MWh of energy produced, fixed but indexed