In the midst of his otherwise vacuous speech to the Conservative party conference Boris Johnson made an important policy pledge on electricity generation from renewables, saying that by 2030 off-shore wind would be providing electricity for every house in the country, with the target being raised from 30GW to 40 GW by then.

According to GWEC, the UK continues to have more installed off-shore wind capacity than any other country. At one time this looked like a niche market, but increasingly countries are turning to off-shore wind as the advantages become clearer and the technology improves. The latest is the “brand new technology” of floating off-shore wind platforms, presumably based on previous experience of oil and gas floating installations. Exciting enough for Boris to talk of investing £160million in turbine development, including fixed and floating windmills. Indeed he had enough confidence to announce a target for floating off-shore wind electricity generation of 1GW, also by 2030. This is ambitious: Boris claimed that 1 GW represented over fifteen times as much as the current volumes world-wide.

The substance of his speech was reproduced  in a long press release, issued by No 10 on 6 October. This suggests that the announcement is indeed “ the only real policy commitment in the whole speech”. Interestingly, it also includes a number of positive and supportive statements by relevant individuals, including the head of Renewables UK. At the very least this implies some serious prior consultation . 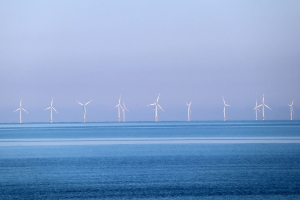 Image by Thomas G. from Pixabay

One statement notes that improvements will be needed in the UK supply chain; another comment pointed out that the provision of electricity from off-shore sources for all houses by 2030 will necessitate an investment of some £50 billion; a third that a crucial element will be the Government’s ability to grant sea-bed licences and process contracts at record speeds. The response is a pledge to support up to double the capacity of renewable energy in the next Contracts for Difference auction-which will open in late 2021.

Of course this is all part of a larger whole. The Government has a number of other fish to fry in terms of employment. Boris has already reiterated the importance of the target of 2050 for the UK to achieve zero-carbon status and pledged investment in “high-skilled jobs in solar, hydrogen and nuclear, plus carbon capture and storage”. All this is to be welcomed, though “carbon capture and storage” may continue to be challenging both financially and technologically.

And then there are electric cars. It is a sign of the times that Honda will no longer supply to Formula 1 and have moved their engineers to reach a new target of 2/3 of their revenue coming from electric and hybrid cars. But besides their undoubted industrial importance electric cars  also have a political dimension. People need to be persuaded to buy new electric cars at what is a difficult time. Certainly governments have a role in the steady tightening of emissions legislation. The British Government is poised to bring forward to 2030 from 2040 the ban on the sale of petrol and diesel cars “to help the roll-out of electric cars in the UK”, and the Mayor of London is to expand the Ultra Low Emission area to include the whole area covered by the North and South Circular roads, But the fact remains that in the latest figures from the Society of Motor manufacturers, the registration of pure electric cars represented 6.7 per cent of total new car registrations, whilst adding in plug-in-hybrids takes the figure to 10.5 per cent .

Certainly an increase, but hardly a decisive change in the tide.