Earlier this week, GWEC released its supply-side analysis for windpower for 2019. Supply-side means that the data refers to the total capacity of wind turbines installed based on wind turbine manufacturers figures. (Demand-side data refers to total capacity connected to the Grid and is used, eg in GWEC’s analysis of windpower  in 2019– see Greenbarrel of 1 April 2020,) According to this latest report, 22,893 wind turbines were installed globally in 2019, produced by 33 suppliers and accounting for over 63 GW of capacity, a new supply side record.

Overall, the main points to notice are that turbine sizes keeps growing with the  average rated capacity for new turbines installed in 2019 larger than 2.75 kW- a 72 per cent increase from the average in 2009; industry consolidation continues steadily, with a decline in suppliers from thirty-seven in 2018 to thirty-three last year. It is also noteworthy that Siemens Gamesa Renewable Energy was responsible for nearly forty per cent of offshore wind installations in 2019 – a huge number, which reflects a doubling of its offshore activity by comparison with 2018. Finally, in 2019, eight Chinese turbine vendors were included in the rankings of the top fifteen suppliers, but the top two spots were both held by European suppliers, Vestas and Siemens Gamesa.

Vestas continued as top supplier in 2019, accounting for 18 per cent of all wind turbines installed in 2019, thanks to its global diversification strategy with installations in more than 40 countries. The other European, Siemens Gamesa Renewable Energy (15.7 per cent) was second, partly because the company doubled its offshore wind installation in 2019 but it also expanded its geographic coverage. Goldwind (13.2 per cent) and the highest Chinese supplier, which actually installed more on-shore turbines than Siemans Gamesa, was third, increasing its annual installations by 19 per cent after a rush in its home market. GE Renewable Energy and Envision remain in the fourth and fifth position respectively for global market share, both showing increases thanks to similar installation rushes in their home markets of US and China. 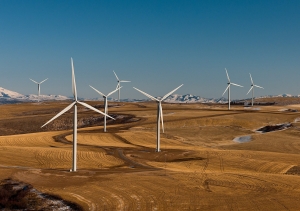 Mingyang and Nordex Acciona also benefited from the same installation rushes, both moving up one position to sixth and seventh place respectively. Enercon dropped by two positions to eight place in 2019, primarily due to a significant decline in installations in its home market, Germany. Windey entered the top ten for the first time ever as the supplier doubled its installations in China. Completing the top fifteen wind turbine suppliers in 2019 are Chinese suppliers Dongfang, Sewind, CSIC Haizhuang and United Power along with German supplier Senvion and the Danish-Japanese joint venture MHI Vestas. Interestingly, this company is purely an off-shore wind turbine supplier and its entry into the global rankings for the first time may perhaps demonstrate the increasingly important role that the offshore industry is playing in driving wind power growth. For of the top fifteen wind turbine suppliers, ten installed offshore wind turbines in 2019, accounting for almost all of the record 6.1 GW capacity of offshore wind installed.

Feng Zhao, the Strategy Director of GWEC, is quoted as saying “2020 was forecast to be another record breaking year, however, with the COVID-19 crisis now disrupting the global supply chain and causing significant delays on wind project execution, major stakeholders in the wind industry have been forced to withdraw their 2020 financial and production guidance as well as adjust their market outlook for the year.” So although the rankings for 2019 show the top two suppliers both being European, it is entirely possible that these rankings will shift in 2020 depending on how quickly countries and businesses can recover from the pandemic: