Batteries are the ever-present power sources that the modern world relies on. From single-use button cells to rechargeable car batteries, these devices can be tailored to meet seemingly any energy demand. As intermittent renewable energy generation becomes more prevalent, large battery reserves could help to smooth the electricity supply. They have extremely fast response times, can be run with small operational costs, and their modular nature makes it possible to update such reserves as the grid evolves.

In 2017, the self-promoted “largest battery in the world” was constructed in South Australia to increase grid stability during the extreme weather events common to the region. The Hornsdale Power Reserve, as it’s officially called, uses lithium-ion batteries and was constructed by Tesla, Inc. for a total cost of A$90 million. It is a battery bank used to smooth the output of the neighbouring Hornsdale Wind Farm. Two years later, the reserve had been successful enough that the operating company, Neoen, increased capacity by 50 per cent to a full 185 MWh. Commercial operation of the expanded capacity is expected to start within the next few months.

However, this expansion cost nearly as much as the initial build of the reserve at A$71 million. This is because of a major flaw with battery energy storage: their capacity is relatively limited and costly to increase, in large part because power generation and storage are coupled within the same, expensive device. 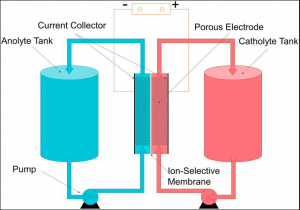 Flow batteries are designed to work around this problem. Particular chemicals are kept as a concentrated solution in storage tanks, then pumped into a central unit containing the electrodes and other components that harness the chemical reactions to produce electricity. The unit therefore operates in a similar way to a standard battery, except that it is being constantly replenished with new, unreacted chemicals. It runs in reverse to recharge.

Increasing the capacity of a flow battery simply requires larger tanks or a more concentrated solution. Compared to conventional batteries, recharging is much less damaging, allowing for many more charge–discharge cycles to be performed, and some can be near fully charged or discharged without negative consequence. Further there is less self-discharge, allowing energy to be stored for up to a month. However, it is difficult to avoid some unwanted chemical reactions, which lower the efficiency, as does the energy requirement of pumping. Flow batteries therefore, are less efficient than conventional batteries on short timescales but can store energy for longer if needed.

Flow batteries can be split into two major categories by the class of active chemical they use – metallic or organic. The former is well established and are mostly vanadium-based devices. Compared to other flow batteries they have good efficiency and have few unwanted chemical reactions. However, they need close thermal regulation, which decreases system efficiency, and have a low energy density. The raw materials are also generally more expensive compared to traditional battery materials such as lithium or lead.

Organic flow batteries are less expensive, requiring cheaper components within the central unit as well as being cheaper as a raw material. A basic calculation by Huskinson et al. [1]showed that a given organic flow battery operated at a third the price of a similar vanadium flow battery per kilowatt-hour. However, the long-term stability of organic molecules is questionable, leading to shorter lifetimes for such devices.

Flow batteries can certainly support the model of operation found at the Hornsdale Power Reserve. But it is also possible to couple a flow-battery system to a solar farm directly, removing overall complexity and regaining some efficiency. Instead of producing an electrical current, solar cells can be used to induce the chemical reaction that usually occurs during active charging of a battery. During times of lower demand, the charge is stored in the tanks of the flow battery, and in turn released during times of higher demand. Flow batteries are able to support this due to their extremely high tolerance of the charge-discharge cycle, and it would put less stress on a grid management system that would otherwise be trying to balance separate production and storage facilities. However, the process is still in development, and yet to reach an efficiency level that makes it viable.

As the future requires the use of more renewable energy, the need will increase for ways to reduce its inherent intermittence. Flow-batteries already have the potential to meet that need, and new variants of the technology are always being developed. It may eventually be possible to directly couple them to solar panels to reduce the complexity and inefficiency of such a system. However, that advanced technology has a long way to go yet. If their efficiency can be increased, they could quickly become a key technology that allows for a greener, reliable grid.