If you wanted to invest  $100 billion in fuel for cars, would you be better off buying crude oil or building wind and solar farms? In a recent report BNP Paribas is clear: crude oil would need to sell at $10 – $20 per barrel to match the energy obtained from the wind and solar farms. With current oil prices near $60, renewables provide three to six times more energy to the wheels of an electric vehicle than do petrol or diesel vehicles for the same investment.

The report, entitled Wells, Wires and Wheels, is a type of life-cycle study that looks at the energy returned on capital invested (EROCI). It considers how much crude oil you could buy with $100bn at different prices and, after allowing for the costs of refining, transportation and taxes, calculates the gross EROCI available at the pump. Then after allowing for the large loss of thermal energy in a petrol or diesel engine it arrives at the net energy available to turn the wheels.

Similarly, if you invested $100bn in onshore or offshore wind or solar farms and allow for capital and operating costs, for the cost of infrastructure to transport the electricity, for the energy loss in transmission networks and for the losses inside the electrical car, the report calculates the net EROCI at the wheels.

The results are certainly striking, but some assumptions can be questioned. Key numbers, such as the cost per GW of a wind or solar farm, depend on the part of the world considered, but this is not specified. (The numbers used are $1.2bn per GW for onshore wind, $1.8bn for offshore wind and $0.8bn for solar). Leaving this aside there are four main factors that are not taken into account. 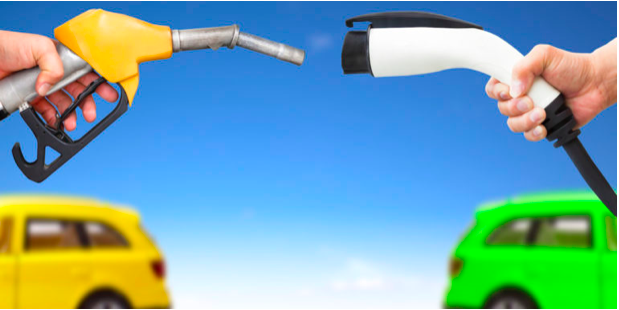 The first and most important is the intermittency of wind and solar and the need for storage or alternative power sources to fill the gaps. The report makes no mention of this, but the cost can be considerable, possibly raising the total cost by as much as 60 per cent (Greenbarrel, Nov 2017). Note that adding a few batteries is not sufficient, since periods of low wind output can last days.

The second is the cost of new transmission and distribution infrastructure.  The report assumes that this amounts to 25 per cent of the cost of the farms, but this may be low. New long distance transmission lines are expensive: the proposed high voltage dc line from Oklahoma to Tennessee, currently on hold, is estimated to cost around $1bn per GW. To this must be added increased local distribution capacity and the provision of charging points. Of course some of the new capacity will be used for purposes other than transport, such as residential heating, so the cost would be shared.

The third question is over the inclusion of taxes on petrol and diesel. The taxes, at 17 per cent of the fuel cost, are typical for the US. UK and European drivers might raise an eyebrow at such low rates. If their tax rates were used the argument for renewables would be overwhelming, but the question here is whether taxes should be included at all in the comparison, and if they are for oil why not for electricity. It is certain that some of the cost of decarbonisation will be recovered by adding to the electricity bill, as is already done in Europe.

Finally, the lifetime of the wind and solar farms is considered to be 25 years, meaning that after this period the same amount of capital will need to be invested. It could be argued that by this time other renewable solutions may be available. It is, however, a sobering thought that the entire set of wind and solar farms might need to be replaced twice before the end of the century.

In the case of oil there is no such limit as the investment in finding and developing new fields is included in the price. The report concludes that cheaper renewables will make most new fields uneconomic, leading to stranded oil and “…the death toll for petrol”.

Overall the concerns raised above probably do not alter the thrust of BNP Paribas’s argument – that in order to provide the same energy to move a car as renewables, oil would need to be cheaper than it is now. However the difference is not as big as the authors claim. In the meantime oil has the infrastructure, and there are other factors such as range anxiety, higher cost and simple inertia that will slow down the introduction of electric vehicles. Oil will be around for a while whether we like it or not.