What is the true cost of power from offshore wind?

In the previous offshore wind auction, held in 2015, the strike prices ranged from £114 to £120, leading some people to question whether the new bids were serious, arguing that investment costs were not falling fast and the bids were basically a bet that the price of electricity would rise above the strike price, and that if it doesn’t the wind farms would not be built.

Data from the Facilitating Offshore Wind in India study (FOWIND) and elsewhere do indeed show that the investment costs have only fallen slowly, with the increased efficiency in manufacturing and the higher load factors from bigger, taller turbines being offset by the greater costs of installation in deeper water.

However looking ahead, it is not just in the UK that costs are predicted to fall significantly. New projects in Denmark and the Netherlands have won bids to supply electricity below €65 (£57.5) per MWh. The lowest is Krieger’s Flak in Denmark at €49.9 (£44), at a water depth which is similar to Triton Knoll. These bids do not include transmission from the wind farm to a land sub-station. In the UK these costs, which can be 15 per cent of the total, are included in the strike price.

So, assuming the bids are serious, how good are they? The first point to remember is that all prices are 2012 pounds. At an inflation rate of 2 per cent, a strike price of £57.5 will become £70 in 2022. Of course the wholesale price of electricity is also expected to rise, but it may or may not and in the last few years it has not. The second point is intermittency.

Intermittency
The plot below shows the output from offshore wind farms in England and Wales over the last 30 days. The variation is enormous – from 0 to 5000 MW. It is often assumed that there is always some wind somewhere, so that wind farms in the Irish Sea would complement those in the North Sea. This plot shows otherwise. 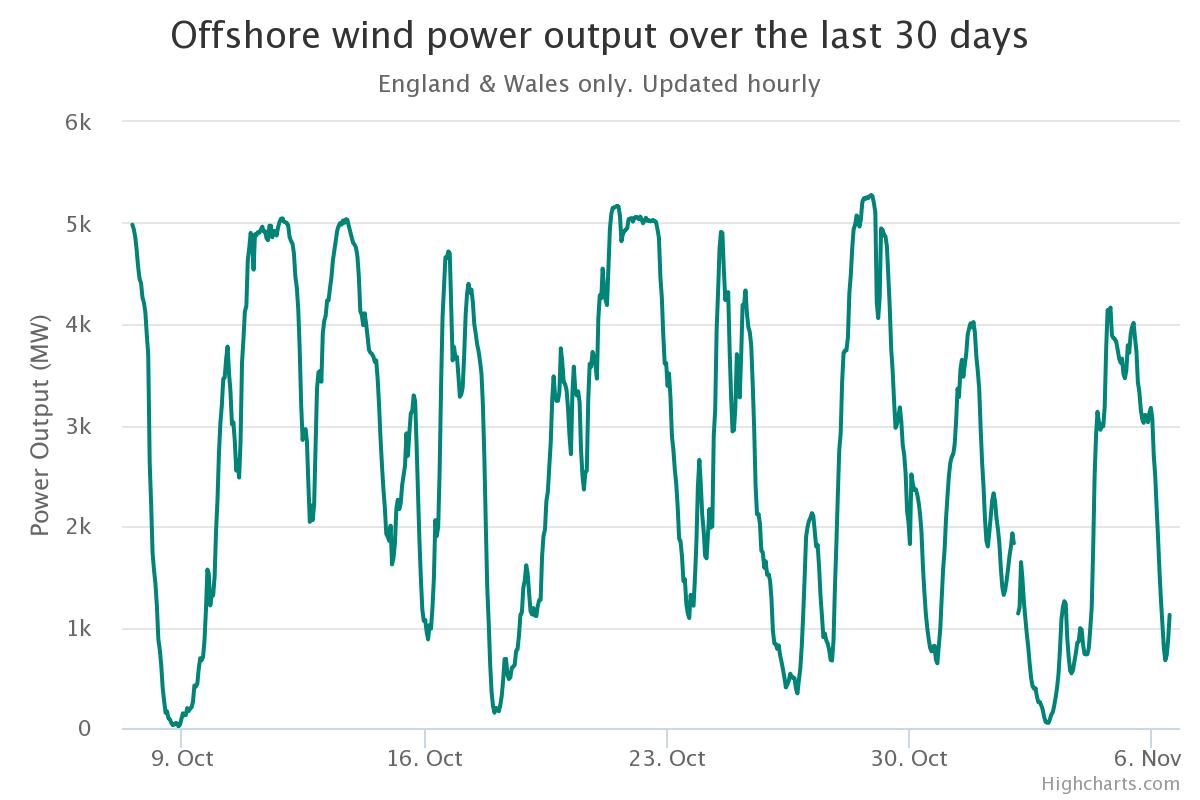 The average offshore wind power in 2016 was 1870MW (1.86k above). Note that wind turbines cannot handle wind speeds above a certain value, which probably explains the flattening near 5k. From the Crown Estate

Wind power is thus highly variable (more so than solar). What happens when there is very little wind power for two days, as around October 9 below? Some other power generator must be used, probably a gas turbine. There is a cost to having such a plant both available and on stand-by. This must be added to the strike price to get the true cost of wind.

Calculating this cost is not easy. When wind production is a small percentage of total UK consumption there is sufficient capacity elsewhere in the system to handle the low periods with little disruption. But as the wind percentage increases we will either need to keep conventional generators on stand-by or use storage.

Storage
One option for storage is lithium-ion batteries. Their cost is predicted to fall to $100 (£75) per kWh in 2021/22, but how many would we need? Using published load factors for the last few years, the 860MW Triton Knoll wind farm might produce power that is equivalent to a continuous rate of 304MW (see the article “Capacity is not the whole story” for more on load factors).

It then depends how long we need to draw power from storage. We can never store enough to cover all intervals of low power but, looking at the plot above, it might be reasonable to store 304MW of power for two days, which means the batteries must hold 14600MWh. About 10 per cent of the energy is lost charging and discharging the batteries, so the real need is for 16000MWh.

At £75 per kWh this means a capital cost of £1.2 billion for the batteries. It is estimated that Triton Knoll will cost £2 billion. To compensate for the extra capital cost a strike price of £119 rather than £74.5 would be needed. For the other two projects the price would be £92 rather than £57.5.

These calculations make many assumptions. In reality the needed storage capacity will depend on the mix of other power sources. Storage might become cheaper, and so on. For comparison the Guardian, in an editorial on September 7, stated that the strike price of the two later projects would be £70 with storage. No explanation was given, but using the calculations above this corresponds to storage of a little under a day.

Dieter Helm, in his recent Cost of Energy report, uses the concept of Effective Firm Power. Firm power is power that is guaranteed to be available. Wind power is not firm so the published load factor must be reduced to allow for this. Taking Professor Helm’s estimates and applying them to offshore wind suggests that the true cost of wind power should be 67 per cent higher than the actual cost to allow for intermittency. Thus if the actual cost is £57.5 per MWh the true cost is £96.

Whatever the actual numbers it is clear that we cannot compare the strike price of wind directly with that of near-continuous generators such as gas turbines or nuclear. Intermittency is real and must be allowed for.