On 10 July Verditek announced that its flexible solar photovoltaic panels had received certification from the IEC[1]as suitable for long term operation in general open-air climates. It can now start manufacturing the panels at the factory of its subsidiary, Verditek Solar Italy (VSI), outside Milan, with plans to produce 1 MWp of panels this year and 3MWp next year (1 MWp corresponds to about 3000 standard panels).

This is a significant step forward. The panels are mounted on plastic, not glass and are 3mm thick and weigh six times less than standard panels of the same size. The advantages over the traditional rigid panels would seem to be obvious: installation is easier and cheaper and they can be mounted on curved surfaces. However it seems that flexible panels are not yet accepted for general use. Even VSI only promotes its product for low load-bearing roofs, car park roofs and other special situations. Why is this?

Flexible panels are often said to be less efficient, therefore requiring more area to obtain the same power output, and as being less robust and long lasting.  The reputation for efficiency comes because they traditionally used less efficient thin-film materials rather than the usual silicon. VSI’s cells use monocrystalline silicon with an efficiency similar to standard cells. In addition they have patented low-resistance connectors between the cells that reduce losses.

Roof-mounted panel do indeed have to handle high winds, hailstorms and extreme heat but backed by its IEC certificate VSI offers a 10 year guarantee, similar to many standard panels but below the 25 years offered for top of the range rigid panels. Their price is not yet quoted. This plus remaining concerns about robustness may explain why flexible panels are not in general use. 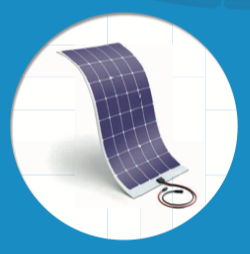 To market its panels Verditek has formed collaborative agreements with two UK companies, Engenera and Optimeyes, that provide renewable energy solutions and products. The manufacturing facility outside Milan has two production lines able to produce a total of 20MWp per year, so there is plenty of capacity available.

Verditek also collaborate with Paragraph, the Cambridge based experts in graphene-based electronics. Their agreement has recently been extended to work on the performance of a photovoltaic cell that uses graphene in place of the usual metallic connectors. Successful completion of the first collaborative project – building a cell with graphene to show proof of concept – was announced on 18 June.

Verditek listed on AIM in 2017 as a company that “…takes early stage positions in clean-tech businesses and provides funding and management to take them through to commercial revenue and profit”. It started with three such businesses: a majority share in the Italian manufacturer of solar panels; a majority share in BBR Filtration, a Hampshire based company that applies patented filtration and deodorisation technology to wastewater and industrial effluent; and a holding in WES, which has systems to improve the mixing of gas with liquid in industrial processes designed to remove, for example, CO2 in a carbon capture tower.

Since then the emphasis has swung strongly towards the solar panel business. From June 2018 Verditek effectively bought out the minority shareholder and formed VSI. In May this year Verditek terminated its agreement with other shareholders of BBR Filtration, allowing the latter “..to develop alternative commercial relationships in conjunction with a new company”.

In October 2018 the shareholders of WES (Westec Environmental Solutions) accepted an offer of US$500,000 from Industrial Climate Solutions, an unlisted Canadian company.  Although this left Verditek with a 22.34 per cent share holding in the latter, it lost an estimated £467,882 in the value of its investment. However the company still feels that the technique could revolutionise the carbon capture market. That, plus Canadian government funding, makes it worth hanging on to.

The stock stands at 5.4 pence for a market capitalisation of £10.9m.