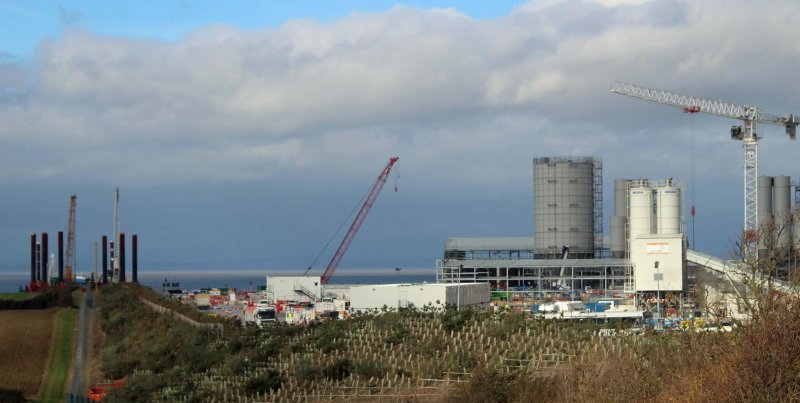 Hinkley Point C, a new reactor in the West of England. Image: By Nick Chipchase, via Wikimedia Commons

Financing nuclear power stations is proving impossible for business, so Boris Johnson plans a new UK nuclear tax for all to pay.

LONDON, 29 July, 2019 − All electricity consumers in Britain will pay a new UK nuclear tax, a levy on their bills to finance the construction of nuclear power plants under a scheme announced by the UK government.

Called a Regulated Asset Base (RAB), but in reality a nuclear tax levied on electricity bills, the charge has no limits, so consumers will go on paying for any cost over-runs and delays, however long it takes to build a nuclear power station.

The plan, launched by the UK Department for Business, is also to finance the as yet unproven technologies of carbon capture and storage.

In both cases the consumer would be asked to pay for all the risks while the large nuclear companies got cheap finance for their projects.  Under the government’s proposal, the taxpayer would also foot the bill if the schemes were ultimately scrapped.

The nuclear industry, particularly EDF, the French government-owned utility, is delighted by the idea, because its power stations are so costly it can no longer afford to finance them itself. Getting the consumer to pay the costs up front will save billions of pounds in interest charges, and so the theory is that when the power station is finally up and running the electricity produced will be less expensive.

Many campaigners are appalled at the idea, partly because renewables like solar and onshore wind are less than half the price of new nuclear. They can see no need to force consumers to spend huge sums on a technology that many countries in Europe have already abandoned, among them Germany, Spain and Italy.

Initially they calculate that £6 a year would be added to every electricity bill to pay for nuclear energy, even if consumers were already committed to buying only from renewable sources.

Part of the problem with nuclear reactors is the uncertainty that surrounds them, because construction takes so long. The average delay of EDF’s current reactor projects in France and Finland is 10 years − and neither is yet operating.

So much concrete is poured for a new nuclear station that it adds to climate change before construction is complete. By the time any reactors financed by this scheme are up and running, the battle to avoid the atmosphere overheating could well be lost, according to scientists .

The idea of charging consumers to pay the capital cost of large public schemes like sewage works as they are constructed has been tried successfully in the UK on the Thames Tideway Scheme in London, which is costing £4.2 billion ($5.25bn). The money from consumers was used as the scheme progressed, keeping down the overall cost because huge loans are not required, but the scheme has its critics because the profits went to shareholders of the water company.

The government’s view, represented by the business and energy secretary Greg Clark, in a comment made the day before he was sacked by the new Prime Minister, Boris Johnson, was that it was essential to find a way of financing big projects so that Britain could transform its energy sector to avoid climate change. His successor, Andrea Leadsom, another nuclear enthusiast, is likely to take the same view.

Both carbon capture and storage and nuclear needed to be developed, Mr Clark said, and ultimately this way of raising finance as a levy from the consumer would cut the cost of raising the necessary capital and would bring costs down.

However, the size and scale of the Sizewell C nuclear power station project in Suffolk on England’s east coast, which would be the first to benefit from the UK government’s new scheme, is far larger than any other RAB scheme, costing at least £16 billion ($19.9bn). It is also longer-term and more risky than anything tried before.

A similar idea was tried in the US – getting consumers to pay up front for two nuclear power reactors in South Carolina – but it was abandoned when $9bn had already been spent.

The cancellation of these two new reactors became inevitable when Westinghouse, which designed the reactors, filed for bankruptcy. The consumers got no electricity for their money.

It was the local opponents to the proposed Sizewell C power station who calculated that the RAB idea would add around £6 a year to customer bills across the UK, including those on renewable energy contracts.

Alison Downes, co-chair of a local action group, said: “Most of EDF’s EPR (third generation pressurised water reactor) projects have over-run and over-spent, so there is a high risk of even more costs being passed on to householders and taxpayers.

“Having campaigned for many years to get EDF to change its construction plans for Sizewell C, the idea of paying extra for the privilege of major disruption and the threat of environmental damage to protected sites really sticks in our throats.” − Climate News Network

Paul Brown, a founding editor of Climate News Network, is a former environment correspondent of The Guardian newspaper, and still writes columns for the pape