No-one can deny that profound change is on its way in the motor industry: electricity, batteries and launch of numerous electric versions of new cars are the stuff of daily discourse. But the Formula E Championship for electric cars, as distinct from the Formula 1 Championship for high performance motor cars, would seems to have slid through a bit below the radar until a recent Financial Times (FT)  supplement informed us  that Formula E racing, which is sanctioned by the International Car federation (FIA) is in its fifth year.

So how does Formula E differ from Formula 1? The first thing to say is that Formula 1 is hugely successful financially, whereas Formula E has yet to turn a profit. But, according to the FT, the latest recorded loss, at Euros 20.88 million, was less than the loss in the previous year. Significant sponsorship is one reason why it has been possible to prioritise growth rather than profitability. In January 2018 it was announced that the Swiss engineering company, ABB, would be sponsoring the Formula E series as such, while a number of the competing teams represent major motor brands like Audi, Jaguar, Nissan and BMW. For these manufacturers, Formula E provides an opportunity to experiment with electric technologies, improve them and then utilise the results in the evolving mass market on the roads. (It is noteworthy that quite recently both Mercedes and Porsche have announced that they will be participants in season six. Electric and greener is clearly attractive commercially) 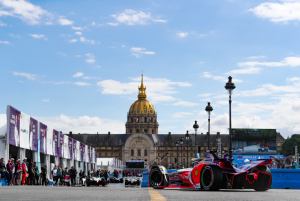 There are significant differences by comparison with Formula 1: the cars are standardised, so there is an appreciable limit to the amount of money to be spent on being competitive; the chances for innovation lie with improved software, working on how energy is used, perhaps regenerated by braking or utilised in cooling technology. Significantly, in the eleven races so far in the current series there have been a number of different winners, though the aim is not just to win, but to win while using as little energy as possible. The Gen2 race car was introduced for season five with significantly improved power and range, thus eliminating pit stops altogether, except for damage. Crucially, the car benefits from an improved battery which enables the whole race to be run on a single electric charge (Important in terms of spectacle). It is not difficult to see how developments in battery technology in the context of Formula E could be relevant to reducing “range anxiety” in the market more generally. Other innovations are a shorter race distance/time limit and arrangements for drivers to pick up extra electric power by diverting their car to transit a specific part of the course.

A further major difference is in the type of courses: the Formula E Championship races take place not on special tracks, often at a distance from the centre, but around roads in the very heart of cities, in many cases capital cities. This season there have been races on five different continents, with locations including Paris, Rome, Mexico City, Monaco, Santiago, Hong Kong and Berlin, with Bern and New York yet to come to finish off the thirteen-race season. London is expected to close the next (sixth) season.

But perhaps there is another element in Formula E in terms of the overall context: at a time when motor manufacturers have not had a good press, they may see participation as a chance to be seen as embracing a cleaner, less polluting future. As the website states “FormulaEis more than just a racing series – it’s a battle for the future. Our cars, powered by pure electricity, pave the way for the cars of tomorrow.”