On 18 June NextEnergy Solar Fund (NESF)reported on their positive performance in the calendar year to 31 March 2019. NESF is a closed-end fund, based in Guernsey, investing in solar photovoltaicassets in the UK (and Italy). Established in 2014, the company is now large enough to be included in the FTSE 250 Index as from April 2019.

Perhaps the first point to make is that the year under review was a “good” year for solar. The fair weather in the summer, combined with the unexpected sunshine in February meant that irradiation was 9 per cent above expectation (2018: 0.9 per cent below expectation) In the event this translated into an increase in electricity generation of just over 9 per cent above budget.  It is worth pointing out that there is not always a direct correlation between increased sunshine and increased electricity generation because the “performance of the panels is reduced by high temperatures and grid curtailment occurs when capacity is reached”. 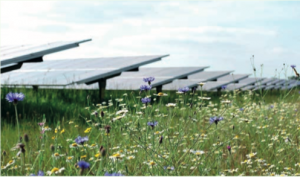 During the year the increase in installed capacity was 122MW, to give a total of 691MW from 87 assets, (2018 a total of 569MW). This prompts the realisation that the average size of each asset is relatively modest. The Annual Report notes that the focus on optimising the return from the portfolio includes “deploying excess cashflows in acquiring smaller assets, principally commercial and industrial rooftop plants with attractive risk-weighted financial returns…”

A further point to note is that the company’s holdings now include the Italian Solis portfolio which was acquired in December 2017. The portfolio was acquired with long term debt of Euros 76.9m (£68.1m) which has now been fully repaid, following the issuing of £100m of preference shares in November 2018.

The elephant in the room for the future is, of course, the curtailment of government subsidies. Solar farms already operating will continue to enjoy their subsidies; that will make them both attractive and relatively expensive. The Report notes that “Due to the current demand for operating solar plants, we expect that prices will remain elevated for the foreseeable future” and that “Any opportunity to acquire operating solar PV assets in the UK will be closely scrutinised….but we expect to have limited growth from those opportunities”. So where will future growth come from?

The answer, at least according to the NESF Report, lies in non-subsidised solar installations. “We are targeting a total of between 100 and 150 MW in subsidy-free solar plants”. Significantly, in February 2019 the company began construction of a 5.5MW solar installation at Hall Farm II. It is anticipated that it will be commissioned and start supplying electricity to the grid in Q 3 2019. Thereafter the company plans to construct a 50 MW plant at Staughton, in Bedfordshire.”.. they will demonstrate the economic case for new solar PV assets in the UK compared to other energy generation technologies, many of which still require extensive and expensive subsidies.”

In conclusion it is perhaps worth noting that there is a world of difference between building and commissioning a solar farm and buying a solar asset which is already generating electricity. A number of companies have found the former too challenging. Let us hope that NESF has better fortune.