How many electric cars will it take to constitute a revolution?

Given the recent news stories about Tesla, this is perhaps a good moment to try to assess how far the electric car has come and whether it needs to travel further before the “electric revolution” can really be said to have arrived.

One of the issues is that of overall perspective. For example, Norway has 130,000 electric cars registered for a population of 5.2 million people, the highest number of electric cars per capita in the world. Yet the total number of registered cars on the roads of Norway in 2017 was 2,719,395. While change is clearly happening, the overall numbers seem short of the rhetoric. In January 2018, 17.6 per cent of all cars registered in Norway were electric, a further 33.8 per cent of cars registered were hybrids. That is over fifty per cent of all new registrations, but it is not clear what that tells us about the chances of meeting the Parliament’s non-binding but ambitious target that by 2025 all cars sold should be zero emissions, given that cars registered in Norway had an average age of 10.5 years. Christina Bu, head of the Norwegian Electric Vehicle Association, is quoted as saying that Norway should stick with its generous incentives for electric cars in the hope of meeting this target. But 2025 is only seven years away. 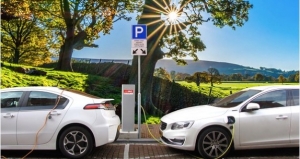 Yet if that is the situation in a country which is “top of the class” for both effort and effect, what is the situation elsewhere in the world? The Chinese pledge to reach the target of 5 million plug-in vehicles by 2020 has to be seen in the context of the 217 million vehicles already in the world’s largest car fleet in 2017. The aim is to reach the target by a combination of cash incentives to buy and increasingly strict emission controls. Other governments have also tried to stimulate a change in attitude. France has announced plans to ban sales of petrol and diesel cars by 2040, with Paris promising earlier action. But the reality is once again that France starts from a low base. The country hopes to double the number of electric or hybrid cars to a million by the end of 2018, yet there are around 32 million cars registered in France (at 479 cars per I,000 inhabitants).

Similarly, the Government of the UK (469 cars per 1,000 inhabitants) has recently committed itself to the “Road to Zero Strategy” which inter alia envisages that the “majority” of new cars and vans sold by 2040 should be zero emissions, and all should have zero emissions “capability” (such as hybrids). The UK says it will reduce vehicle emissions to virtually zero by 2050 with “almost every car and van” producing zero emissions.  Yet at the moment there are around 30 million cars on the roads here, with a total of not much more than 200,000 plug-in cars, according to the Society of Motor Manufacturers. This figure is projected to rise to 1 million by 2020, which will greatly increase the number of EV charging points required (there were only 16,500 in May 2018)

Advocates of electric cars maintain that the technology concerned is a “disruptive technology” like the technology of the horse-less carriage, which will suddenly reach its’ tipping point. So does the situation today allow us to forecast accurately when that tipping point will be? Sadly, the answer seems to be “Not yet”.