Ceres Power strides ahead with some important new announcements

Ceres Power, the manufacturer of a solid-oxide fuel cell known as the SteelCellTM, has made three significant announcements in the last three months and has also produced final results for the year to 30 June 2018.

The first announcement, on 2 August, was for a new partnership with Nissan and The Welding Institute (TWI), backed by the UK Advanced Propulsion Centre, to develop the 5kW SteelCell stack for electric vehicles (EVs). Ceres and Nissan had an earlier agreement with Nissan in the same field. One interesting feature of the SteelCell is that it can run on a variety of fuels, including hydrogen, methane and biogas. It is also more efficient and more readily manufacturable than most other fuel cells.

The second announcement, on 21 August, was of a strategic partnership with Bosch, the large German engineering company, to be followed by an equity investment. In fact the two companies had been working together for some time on the basis of a joint development agreement, but Bosch had not been named.

Ceres are excited about this partnership because Bosch is capable of developing the technology further and adapting it to mass manufacture. In the meantime it expects to earn £20m in license fees, engineering services and royalty fees for its 5kW SteelCell stacks if they perform well. The equity investment of £9m was made late September and has resulted in Bosch holding 4.4 per cent of Ceres’s share capital. 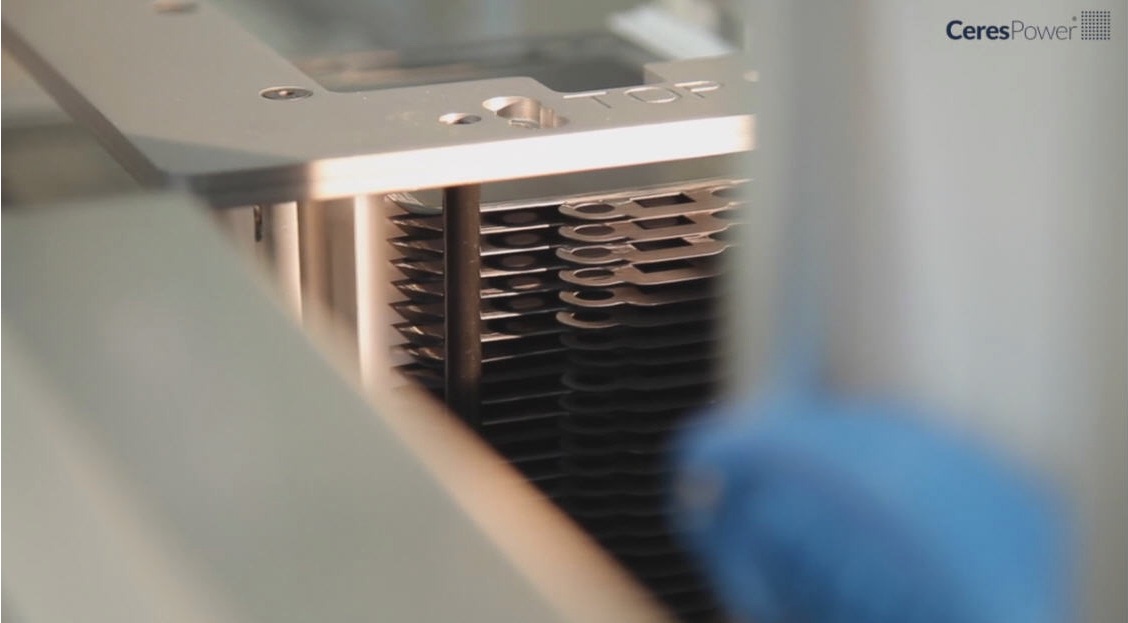 The third announcement, on 8 October, was the investment of £7 million over two years in a new manufacturing facility in Redhill, capable of producing 2MW of SteelCells per year by the end of 2019, expandable to 10MW (or 2000 of the typical 5kW stack, itself made up of many individual cells). The headquarters in Horsham will remain the technical centre.

The need for this expansion could be seen in the annual results, released on 9 October. These show revenues increasing to £7m, up from £4m the previous year with an order book that stands at £30m compare to £3m the year before.

Ceres attribute these good results to the success of its business model, which is to licence its technology to major manufacturers to include in their products. In 2016 the company announced that its goal was to establish significant partnerships with five major companies. It now has partnerships with Nissan/TWI, Honda, Cummins, Weichai Power (see Greenbarrel, May 2018) and Bosch based in the UK, Japan, USA, China and Germany.

What is interesting is not only the geographical spread but the range of applications. As well as Nissan’s EVs, Cummins is interested in supplying power to data centres (2 per cent of global electricity consumption according to Ceres), Weichai Power wants to power electric buses while Bosch is focused on small power stations for factories, EV charge points as well as data centres.

The only darker spot in this rosy scenario is that losses are up slightly at £9.9m from £9.4m the previous year. But this is mitigated by a strong cash position. In addition to Bosch’s £9m, Weichai has invested £20m for a 10 per cent stake and may increase this to 20 per cent if further commercial agreements are reached. A further £20m was raised through a share placement in July.

The strong interest shown by major engineering companies is a big boost. Now Ceres has to manage successfully what will be a rapid expansion in its affairs. The share price stands at £1.97 for a market capitalisation of £286m.