On 17 May RedT released its results for 2017 showing a revenue of €11.8 million, up from €10.8m in 2016, for an operating loss of €7.5m (2016: 6.2m). However, these results are no indication of the future as they are dominated by the company’s Camco carbon trading and consultancy business, which was effectively divested by early January 2018.

Starting in 2015, RedT has been positioning itself as an energy storage expert, based on its patented vanadium flow batteries. This segment shows a revenue of €0.9m in 2017 (2016: €0.3m), which consists of €0.4m of grant funding for an installation in South Africa and €0.5m for the release of licence fees deferred from 2016. By the end of the year RedT had 54 battery units in production or deployed, up from 9 in April 2017, but most had not been commissioned and had not yet produced any revenue.

RedT is placing a big bet on flow batteries, in which energy is stored in liquid containers that are separate from the electrical cell (see Flow Batteries: a brief overview). RedT claims that compared with Lithium-ion and other batteries they are safer and hold charge indefinitely when not in use. On the other hand they are less efficient, losing more energy in the process of storing and releasing the electrical power, and currently more expensive per unit of energy stored. The liquid tanks make them bulky, so they are not suitable for electric cars or other transportation. 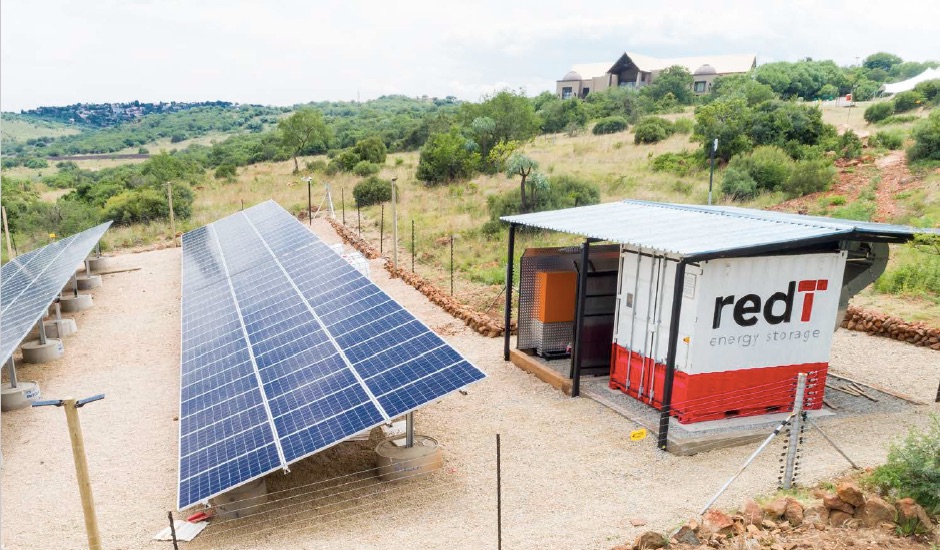 A 15kW-75kWh storage unit for solar panels at the Thaba Eco Hotel in South Africa. Storage systems are built up by combining flow cells in different ways (www.redtenergy.com).

But overall, because Lithium-ion and other batteries lose capacity with time – especially if discharged heavily and frequently – RedT claims that its flow battery provides a lower levelised cost of storage over a longer lifetime of 25 years. On this basis RedT promotes its product as the best solution for long-term storage requirements from 4 to 24 hours.  With the increase in intermittent renewable energy sources this is clearly a booming market both for domestic, commercial and grid-scale use.

Are they right? So far Lithium-ion batteries have received all the attention and development, but this is mainly because they are clearly the best option for transportation and mobile phones. They have a track record that flow batteries cannot yet point to, being seen too much as a wonky research project. However as the storage market grows, flow batteries can expect to establish their reputation and benefit from the cost reductions and improvements that volume manufacturing brings.

RedT expanded its staff in 2017 in both Livingston and Wokingham from 27 to 60. Unusually, manufacturing is outsourced, originally to Jabil, a production company, but this plant was closed mid-2017. Now it is unclear what is done where. Such a strategy reduces the capital investment but in the long run is normally more expensive and less secure.

The company says it has 330 units in “final stage customer selection” for a value of £18.3m, a very large increase, but these are not guaranteed sales. However two new sources of public money show an encouraging interest in the technology: from one RedT will receive a £750k grant from the UK government to accelerate development of the next generation battery; from the other it will provide a large storage system (0.6MW/3MWh) and storage optimisation for a tidal project in the UK, funded by the EU.

Financially, the company had cash reserves at the end of 2017 of £7.4m after a £14.9m share offering in December, and raised a further £3.85m in April. There is no debt, and market capitalisation is £42.4m. Growth is slower than expected the last time we wrote about them (June 2017). The prediction of substantial profits in 2019 is still possible, but with the share price of 5.85p near its five year low the market seems unpersuaded. In 2018 RedT still have all to play for.