We recently wrote about Redflow’ s involvement in grid and off-grid energy storage through the use of Zinc-Bromine batteries. This article on the exciting developments in battery technology looks at the possibilities for Flow Batteries in this area.

The distinguishing feature of a flow battery is that the electrical energy is stored in a liquid (the electrolyte) whereas in rechargeable batteries such as lithium-ion and lead-acid it is stored on the electrodes.  The liquid is stored in tanks and pumped through a cell in order to produce electricity or to be charged.

The electrolytes contain chemicals dissolved in water (mainly). This necessarily makes them bulky and heavy compared to other batteries.  They therefore have low energy density and are not suitable for use in electric cars, but are good for storing energy.

They are thus of particular interest to the renewable energy business for storing energy from intermittent producers such as solar panels and wind turbines. As batteries they are competing mainly with lithium-ion, both having advantages and disadvantages.

Flow batteries can be thought of as carthorses – working steadily throughout a long life – while lithium-ion batteries are like racehorses – high energy density but losing energy with age. 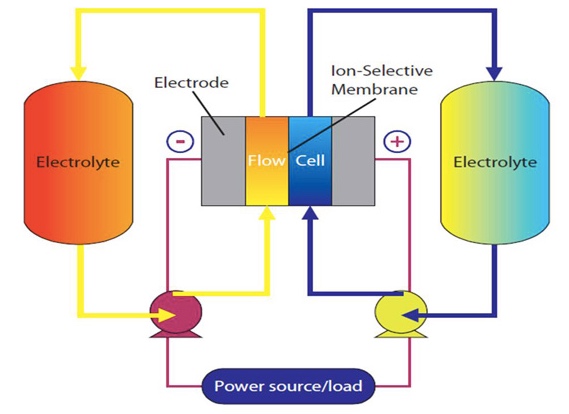 The two electrolytes can remain in this charged state indefinitely. To recover this energy, the pumps are reversed and the electrolytes give up their charge to the electrodes, thereby delivering electrical power to the external load.

Many different chemicals have been used to make redox flow batteries, but few have had commercial success. The Vanadium-Vanadium battery is a true redox battery using two isotopes of Vanadium, while the Zinc-Bromine battery is a hybrid in which zinc is deposited on one electrode and bromine gas released at the other.  Iron-Chromium is another true redox battery.

In another variant, the membrane is removed, with the reactions taking place between two flow streams. This has been commercialised with a Zinc-Bromine electrolyte.

Research on flow batteries mainly concentrates on finding cheaper materials with which to build them, for example organics. But cost is not the only characteristic.

Energy Capacity
Flow batteries are unique in that the capacity, which depends on the volume of electrolyte, is independent of the power, which depends on the cell. This allows easier scaling up but is in itself of limited use. No one wants to power a light bulb for a year, nor an oven for only 10 minutes.

More usefully, a flow battery can be drained completely, or else hibernated with any state of charge without harm or loss of energy. Other batteries lose capacity with time and usage.

Materials
Batteries often use rare elements for technical reasons in the internal cell design, as well as for the main chemical. This makes production volumes and cost susceptible to the availability and price of these elements.

Safety
The saga of Samsung’s Galaxy Note 7 phones highlighted the fact that lithium-ion batteries can short-circuit and catch fire if not designed right. Flow batteries are safer.

Bromine is a highly active gas that is not soluble in water. Therefore, in the zinc-bromine battery the electrolyte concerned contains an amine, which forms a thick oil with the bromine and renders it stable.

Manufacturability
The lithium-ion battery has benefited from over 10 years of high volume manufacturing for computers and phones during which costs have dropped by a factor of five.

Flow batteries have not had this benefit. However the market for which they are particularly suited – medium to large-scale storage for renewable sources – is only just starting to develop.