RedT announce a strategic review, cost-cutting and board changes as sales disappoint

A year ago RedT divested most of its carbon trading and consultancy business, Camco, in order to concentrate on vanadium flow batteries. Some 330 units worth £18.3 million were said to be in the final stage of customer selection. Staff numbers were doubled and analysts projected a profit in 2019. In July the company announced the sale of 40MWh of batteries to a German company to be used to balance the German and Austrian grids. This was the first phase of a project expected to require 690MWh of storage.

Nine months later the picture looks very different. On 14 March RedT announced a strategic review “…to explore the options available to fund its business going forward”. At the same time it made an open offer to raise £2.26 million at 2 pence per share, and warned that unless at least £1.5m could be raised it might no longer be able to trade.

The company also announced cost-cutting measures that included a reduction in staffing levels of 23 per cent. The composition of the Board was changed with the previous CEO, Scott McGregor, stepping down to run operations and a previous non-executive director, Neil O’Brien, becoming Executive Chairman. Mr O’Brien was previously CEO of Alkane, the coal mine methane and peaking plant operator, now part of Infinis. 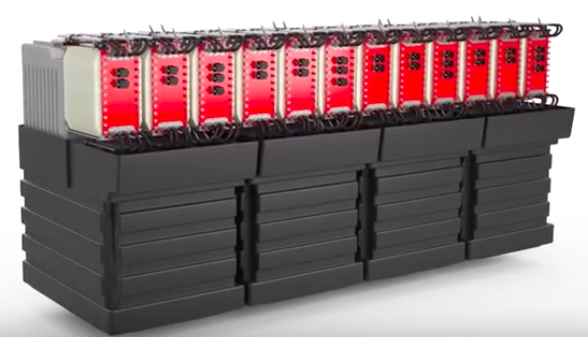 The annual results for 2018 are not expected before May but although a Year-end Update on 18 December remained positive the half-year results published on 13 September did not look encouraging. Revenue from the flow battery business was £0.2m, the same as in H1 2017, for an operating loss of £5.7m, up from £3.2m in H1 2017.

What has gone wrong? Clearly the expected sales have not materialised. For example the German grid balancing project has had to be re-designed after changes to the market bidding mechanism. The 40MWh will now be provided by only 8MWh of flow batteries with the remainder coming from gas turbines. The batteries will be used for frequent rapid interventions on the grid while the gas turbines will provide more power than was available from batteries but less frequently. This is an interesting comment on the German Energiewende showing how difficult it is to move away from traditional carbon sources.

RedT still insists that its prospects are good, estimating that it has a possible pipeline of projects worth £145m even after allowing for different likelihoods of success for projects at different stages of discussion. Such projections have been made in the past but have not proved accurate.

On the other hand the company has sold 34 storage units since October 2018 in Australia, Thailand, Botswana and the UK, which should have brought in about £1.5m of revenue, and a purchase agreement has been signed for 72 units in the UK. In the past RedT sold its batteries directly to end customers but it is now looking at offering more general power-production packages, such as a fully financed solar plus storage scheme for commercial and industrial customers. Unlike some small emerging businesses it is not constrained by manufacturing capacity and claims to be able to produce 1,100 of its latest third generation units in 2019 and 2020. This is possible because much of its manufacturing is outsourced to Jabil Circuit Inc, a large contract manufacturer.

But like other emerging businesses the problem is to finance the operations until a profit is made. It is hoped that the strategic review, to be led by Neil O’Brien, will provide the answer. On announcement of the review and the share offer RedT’s share price dropped from 3.6p to a five-year low below 1p, subsequently recovering to around 2p. However, according to an announcement on 1 April, institutional investors have given assurances that they will take up at least the £1.5m that the company wanted to keep going until the review is completed. This should give some encouragement to investors.