Like other renewable energy groups such as Flowgroup and Eden Research, redT energy (formerly Camco) seemed to be bogged down in development rather than arriving at commerciality. This was partly because they had too many potentially marketable but unproven lines. But it was also because, well, it can take a long time to establish pioneering products.

During 2015 redT restructured Camco, leaving just an African renewable investment business. It also sold its biogas US assets (eliminating debt). This has left the group as essentially a pure play on commercial and utility energy storage machines.

London AIM-listed redT’s chosen method of storage is through vanadium redox flow batteries. The difference between flow batteries and the more commercialised, closed circuit lithium ion batteries — so favoured by electric vehicle (EV) users — is that flow batteries store energy through an electrolyte (such as vanadium) held in two external tanks. 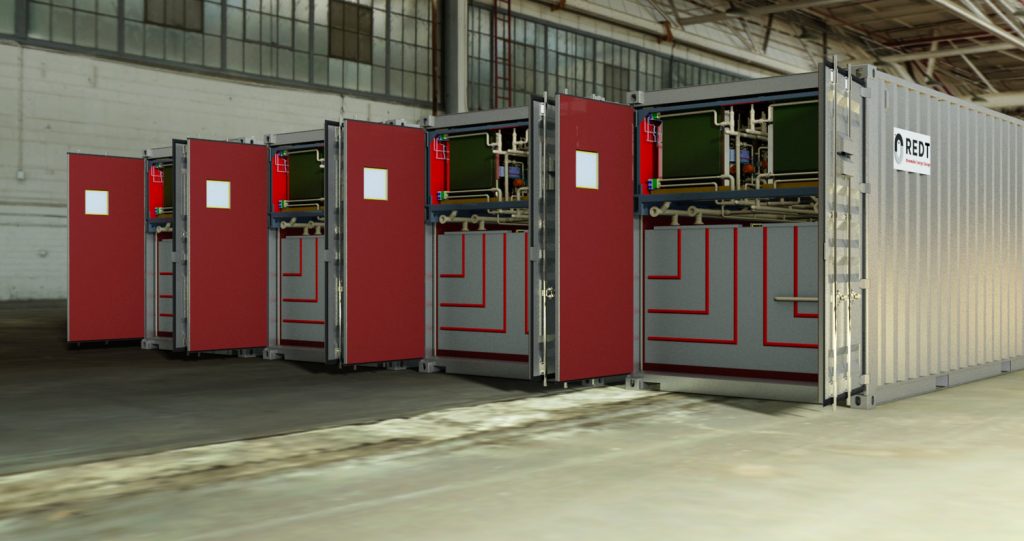 The different oxidation states also exhibit different colours making it possible to use low- cost optical based systems for checking oxidation states. The liquids are pumped into a cell ‘stack’ where each comes into contact with an electrode.

It is widely believed that flow batteries are the most effective for industrial scale storage. Firstly, they have an extensive storage life and require little maintenance. Second, they can be easily scaled up in the amount of energy needed to be stored by simply increasing the size of the electrolyte tank.

Vanadium is the eighteenth most abundant element in the earth’s crust making it more abundant than copper, zinc, nickel, and chromium (source: www.periodictable.com). In the eyes of its enthusiasts’ vanadium is a low-cost transition metal.

But not everyone is convinced of vanadium’s virtues.  A group of Oxford University researchers are very much in favour of flow batteries but say they are looking for a cheaper electrolyte than vanadium.

The management at redT is adamant, however, that the roll-out of what it calls its seeding programme in 2016 was successful. This included its first energy storage machines delivered to a customer site in Johannesburg, in South Africa in June 2016. The two 5-40 (5kW power, 40kWh energy stored) units are to be used alongside solar PV at a residential development for time-shifting and back-up services using excess solar generation.

The company’s ‘behind- the -meter systems’ are an ideal match for solar since redT’s vanadium’s storage technology is suited to these 4-12 hour applications. The peak supply for solar is during the middle of the day, but the peak demand is early in the morning or in the evening when everyone comes home and switches on all the apps.

The Board at redT said it reached another milestone in May 2016 when the company entered into a project with the major European utility E.ON to install another of its so-called Gen1 5-40 machines, made by contract manufacturer Jabil, to run alongside the solar panels array of 3.5MW of solar pioneer JB Weaton in Chard, Somerset.

This is again a small-to-medium sized application but it is probably the precursor of the company scaling up into grid utility services. Joe Worthington the head of PR and Media at redT told Greenbarrel this was a particular area of interest for the company within grid-connected markets.[Joe Worth1]

He gave us a chart of redT’s full product range. It covers multiple systems from kW to MW-scale including a 5-75 module, housed in a 10 ft shipping container, all the way up to a 10 -50 (10MW power, 50MWh energy stored) system which could be achieved by connecting multiple larger, redT 20ft modules. [Joe Worth2]

The company is already in production with its Gen2 product line with Jabil which the company says is 47 per cent cheaper than those produced by Gildemeister, the German market leader, with this discount growing to 55 per cent for the Gen3 models due to come on stream in 2017.

Cenkos adds that on conservative assumptions redT’s Gen3 products are expected to achieve attractive margins and should enable the company to achieve a net profit by 2019. Its forecasts are that revenues should turn out at Euros6.4million for 2016 for a Euros5.2m loss. For calendar 2019 revenues are predicted to be Euros55.8m with a net profit of Euros5.3m.

Cenkos has set a 12- month price target of 20 pence for the shares, which closed at 9.63p yesterday.

By Stewart Dalby|2018-06-07T14:44:41+00:00June 15th, 2017|RedT Energy|Comments Off on The redT energy company heads for commercialisation with its pioneering batteries for energy storage