Some Good News for Flow Batteries

Two recent news items show that flow batteries are starting to receive more attention. In the first, RedT announced the sale of two systems, each with an energy storage capacity of 40MWh, to the German company Energy System Management GmbH (ESM). These are to help maintain equilibrium between supply and demand and to assure a stable frequency on the German and Austrian grids. The two systems are ready to go and are expected to be installed in 2019.  They are the first phase of a project which if all goes well will involve a further 690MWh of storage.

This is a significant step and follows recent changes to the rules governing a part of the German grid known as the Secondary Control Reserve market. Until now this market has been largely satisfied by increasing the output from coal-fired power stations. Being able to enter this market is a game-changer for the energy storage industry, according to Scott McGregor, CEO of Redflow. In his estimate this market amounts to 8000MWh in Germany alone.

To satisfy this market the storage must be able to provide power for at least 4 hours which the flow batteries sold to ESM can do without problem, albeit by limiting the power available to 10MW from each machine. This time is longer than is usually expected from batteries. For example Tesla’a much advertised 100MW battery in South Australia can only provide maximum power for 1 ¼ hours.

Flow batteries store their energy in an electrolyte that is pumped past the electrodes, thereby changing its state of ionisation while being charged and reversing it while being discharged. RedT use a solution of vanadium oxide as the electrolyte, and therein lies a potential problem. Vanadium is used mainly to harden steel so its price is tightly linked to the steel market. Since early 2017 the price has more than tripled because China has tightened its standards on the strength of steel to be used for buildings. 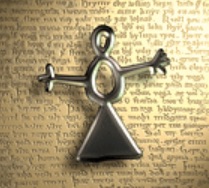 The symbol is based on an 8th-century figurine of the Scandinavian goddess Freyja, whose old Norse name was Vanadis, after whom the element is named (from the Royal Society of Chemists, http://www.rsc.org).

Another manufacturer of vanadium flow batteries, VRB Energy, thinks it has the answer. In June it announced a strategic cooperation with Pangang Group Vanadium and Titanium Resources, a subsidiary of Panzhihua Iron and Steel Company who are the largest steel maker in Western China. Pangang V&T claim to be the world’s largest producer of vanadium oxide so are a useful partner to have.

One aspect of the cooperation is the idea of leasing the vanadium oxide. Unlike the components of other batteries, the energy is held in separate tanks and is not consumed by usage. Thus, after 20 years of life with the cell of one battery the vanadium oxide can be easily recovered and moved to a new cell or used in the steel industry. If VRB can lease the vanadium oxide from Pangang V&T it should be able to reduce the cost of its batteries.

In the longer term the price of vanadium should come down. There are abundant reserves worldwide, with the top three producers and reserve holders being China, Russia and South Africa.

VRB Energy is a private company owned by High Power Exploration, a metals-focused exploration company which is itself part of the privately-owned I-Pulse. It currently has a modest 30MWh of storage installed world-wide, but was recently awarded a contract in Hubei province, central China, for a 12MWh system that can provide 3MW for 4 hours. This is part of a demonstration project that will integrate a large solar photovoltaic system to the grid. The long-term plan is to increase storage in the province to 500MWh with a power of 100MW.

Although there are flow batteries that do not use vanadium (for example, the Australian company Redlow uses a zinc-bromide solution), and there is plenty of research into alternatives, vanadium remains the front-runner for now. The main competitor is Lithium-ion and although the flow battery offers several advantages – longer life-time, deeper depth of discharge, safer and more recyclable – it is not yet seen as cost competitive. An article in The Economist of 21 July noted that it does not have a flashy promoter like Elon Musk. Even so, it is starting to attract attention.