On 26 April 2018, the Global Wind Energy Council (GWEC) released its latest annual report (the 13th) on the world wind-power situation up to the end of 2017. The new global total for installed wind capacity is 539 GW, which is an increase of over 52 GW, an addition of roughly ten percent on the 2016 total of 487 GW. That figure reflected a slightly greater increase of 54 GW over 2015.

As usual, the largest absolute increase in 2017 was in China, which added 19,660 MW of new capacity to the country’s electricity grid. Although this is a 15.9 per cent decrease on the 2016 figure, it still represents 37 per cent of all global installation in 2017. This brings China’s cumulative installations to 188,392 MW, an 11.7 per cent increase on 2016. (The report notes that the forecast is for the growth in wind power in China to gradually slow down over the next few years).

Significantly, there was a change in the regional distribution of wind projects in 2017 in China. Wind installations in the Central and Southern regions increased substantially, accounting for 55 per cent of all new capacity. Previously the majority of installations were in the three northern regions (North West, North East and Central North) and the change should help alleviate the grid curtailment issue, which has been a serious problem. 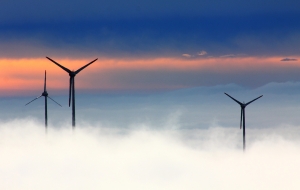 Equally as usual, the next largest increase in wind power installation was in the United States, which saw 7,017 MW of new capacity. Economics are driving sustained growth in the US wind energy sector as the cost of wind power continues to fall – down 67 per cent since 2009. Today, in many parts of the country, wind is the lowest-cost source of new electricity generation.

Cumulatively, there is now 168.7 GW of wind power capacity in the European Union, 153 GW onshore and 15.8 GW offshore, making wind energy second only to gas in the European market. And the provision of the infrastructure for wind power is also becoming an important industry: Of the 10 largest wind turbine manufacturers in the world, five are EU-based.

As important as the gross numbers are the economics, which show wind power, without subsidy, as being increasingly competitive by comparison with power from fossil-fuels. The 72 page report noted that offshore wind had had its first “subsidy-free” bids in Germany and the Netherlands, with tenders for nearly 2 GW of new offshore wind capacity receiving no more than the wholesale price of electricity.