Insights from BMW into the future of electric cars

At an Oxford Energy event on 1 May Andreas Löhrke, Head of R&D High Performance Powertrain Components at BMW, talked about his company’s plans for electric vehicles. Mr Löhrke is based in Oxford, where the company will build the electric Mini, and where it is involved with McLaren and the UK government’s Advanced Propulsion Centre in developing new propulsion technology.

BMW currently produces three models of electric car and five plug-in hybrid models with combined annual sales of 103,000, 4 per cent of total sales. The hybrid contains both electric and internal combustion motors, while some electric models can be fitted with a “range extender” – a small two or three cylinder combustion engine. Since it is uncertain how quickly electric cars will be introduced, BMW see interchangeability as the key. All models are being designed to house either electric, hybrid or conventional power trains, thus allowing rapid shifts in production according to demand.

Hydrogen-fuelled cars are not included in the plan, even though BMW have made some. Mr Löhrke’s opinion was that they are most suitable for special markets, such as people for whom a long range and fast re-charging is essential (for example an inter-city coach) or places such as Japan who are building a hydrogen network. Otherwise he had concerns about the fuel cells used to produce electricity from hydrogen inside the car, and noted that hydrogen adds one more step in the chain from renewable energy to car movement. 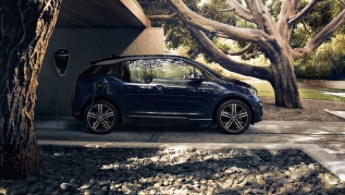 Range is of course a major issue. The current BMW i3 model advertises a range of 125 miles without range extender under common conditions, somewhat lower than the often-quoted psychological limit of 200 miles (see Greenbarrel article). Interestingly the range is less in winter than in summer. This is because the resistance of the internal wiring increases with the cold, thus requiring more of the battery power to overcome it. The effect of heaters and air-conditioners will roughly balance out.

Finally there is cost, and the key question of when the cost of electric power trains will match that of conventional ones. The main factor is the battery. Batteries consist of lithium ion cells, whose cost is expected to drop, while the cost of a conventional motor is expected to rise in response to increasingly tough emissions regulations.  On the other hand improvements to the range require either a larger battery or a more efficient one, both of which will cost more. This conundrum explains why BMW plans to remain flexible and offer customers the three options for the foreseeable future. Of the different models small electric cars are expected to reach cost parity before large ones.

Electric cars are making a big step from an oddity for enthusiasts to a standard showroom option from a major car manufacturer. A word of warning to the environmentally conscious: the manufacture of an electric power train, mainly the battery, releases much higher CO2 emissions than does a conventional power train so that it is necessary to drive the electric car 30,000 miles before the electric car becomes greener than the conventional one.  It is not the car for doodling around with occasionally.