Figures for 2016 show that global palm oil production was over 62 million tons. This is the highest production volume of all vegetable oils, exceeding the second biggest oilseed crop by more than 10m tons and thus of considerable significance in terms of renewables. This tonnage is mainly produced by Indonesia (53 per cent) and Malaysia (32 per cent).

The palm oil industry has faced plenty of controversy before. But that controversy has normally related to land clearance, land use and labour laws. A new study led by Dr. Matthew Luskin, a research fellow at Nanyang Technological University, Singapore, has warned that oil palm production could also pose a threat to tropical forests, beyond the direct loss of habitat. This is because oil palms also provide a rich source of food for nearby wildlife such as wild boars, allowing them to multiply exponentially. The study suggests that their population could grow a hundred-fold even in forests that were over a kilometre away from oil palm plantations.

Apparently, when oil palms start fruiting, wild boars quickly aggregate to feed in the plantations. The abundant food allows them to reproduce massively, causing a huge surge in their population and resulting in dramatic reductions in foliage in the forest. This reduction is primarily driven by pregnant wild boar mothers harvesting vegetation from the forest floor to build nests for their young, thus reducing the number of small trees and saplings by more than half, compared with areas of the forest experimentally fenced to keep the boars out. 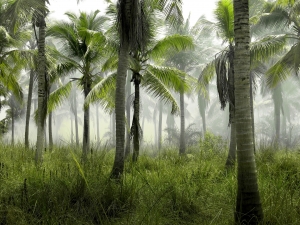 Oil palm growers as well as the countries and regulatory bodies that govern them are urged to consider ways to limit these negative impacts. One solution suggested by Dr Luskin could be for forest reserves to be surrounded by larger ‘buffer’ areas to limit wildlife access to oil palm fruits. With many tropical forests lying within a kilometre of a non-forested area, such as a plantation, well-protected forest reserves may in themselves be insufficient to conserve tropical biodiversity in the face of ongoing agricultural expansion. With many oil palm plantations found near Southeast Asia’s remaining forested lowlands, the study could have important implications for ecology more generally. This potential long term impact warrants more in-depth investigation.

This study focused on native wild boars (Sus scrofa) which are well-known to farmers as crop-raiding pests.  Other animals such as macaque monkeys are also known to forage on oil palm and become common in forests found near plantations. These animals eat birds’ eggs and a variety of other species and also alter the food webs in forests found near oil palm plantations.

“For 10years, we saw that plants and small trees on the forest floor were disappearing but we didn’t understand why,” said Dr Luskin. “Once we started looking outside the forest to the surrounding oil palms, the story became clear. I’ve personally seen population eruptions of pigs and macaque monkeys in forests near oil palms across Peninsular Malaysia, Borneo, and Sumatra. This may become a huge conservation issue for the entire region,”

In addition to the possible ecological impact, it may also be worth adding that efforts to control the wild boar or feral pig population, in the words of the study, “..may also be sensitive in those parts of Southeast Asia where pigs are regarded as unclean and consumption of pork is taboo.” Indonesia and Malaysia are both Muslim countries.