BP to acquire Archaea, and thus expand in Bioenergy

On 17 October, BP announced that, subject to regulation, they have agreed to purchase Archaea, a top American producer of Renewable Natural Gas (RNG), which already has some fifty RNG and landfill gas-to-energy sites across the US. Under the agreement, BP will pay some three point three billion dollars for Archaea, together with a further eight hundred million in terms of debt assumed. The deal supports the doubling of the combined group’s RNG output by 2030, but the real bonus lies in developments for the future, with the potential prospect for around a five-fold increase in RNG volumes by 2030 and a profile of planned projects to match.

The essence of Biogas is the production of gas from vegetable matter, often decaying. Archaea Energy falls within this ambit. Headquartered in Houston, it is one of the largest RNG producers in the U.S., with an industry-leading platform and expertise in developing, constructing, and operating RNG facilities to capture waste emissions and convert them into low carbon fuel. Archaea’s approach is backed by significant gas processing expertise, enabling the company to deliver RNG projects that are expected to have higher uptime and efficiency, faster project timelines, and lower development costs. Archaea partners with landfill and farm owners to help them transform their emission facilities into renewable energy centres. Archaea’s differentiated commercial strategy is focused on long-term contracts that provide commercial partners a reliable, non-intermittent, sustainable, decarbonizing solution to displace fossil fuels. 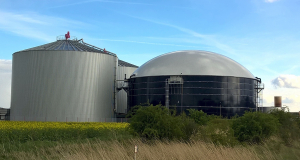 Image by Gerald Krieseler from Pixabay

Four billion dollars is a huge amount to pay for renewables electricity and it is important to be clear that this deal will not increase the amount of renewable electricity. What it will do is change the attribution of that electricity, so the percentage of BP’s expenditure devoted to renewable electricity will rise. It will also fuel the suspicion that it is not that easy for large oil companies to invest large sums meaningfully in renewables projects: they simply are not available as electricity, ready-made, as it were. Over the last eighteen months or so, large oil companies have certainly invested but overwhelmingly at an earlier stage. BP, for example, have made much of winning the right to exploit leases for off-shore wind. The production of actual electricity will be some years away.

Nor is it the case that we are on the very frontier of science here. This is not even BP’s first bioenergy project. That does not stop it being one of five key areas for expansion as BP turns itself from an oil and gas company into an energy company. Bioenergy, or biogas, (two sides of what is essentially the same process) is now seen as a potentially important renewable resource for it is, almost by definition, low carbon. Especially in South America, it traces its origins as far back as to the petroleum crisis of the seventies. It is no accident that BP now runs the second largest biogas fund in Brazil. The largest fund is run by another European oil company, Royal Dutch Shell.