Jobs and revenue losses at Suzlon: the hopefully temporary effects of wind auctions in India

We last wrote about Suzlon, the Indian wind turbine manufacturer, in December 2016 when the company expected that the strong growth seen in 2016 would continue. Suzlon operate internationally but 71 per cent of the company’s installed capacity is in India, leaving the company very susceptible to changes in the Indian market.

Up until mid-year Suzlon were bullish about this market, even predicting that India would add a record-breaking 6GW of wind capacity in the financial year 2017/18. However, the tune had changed by the time the results of the first quarter were announced in August. FY2017/18 was now referred to as a year of transition with additional capacity uncertain and below forecast. This could be a serious blow to India’s goal of reaching 60GW of wind capacity in 2022, since current capacity is around 32GW and requires annual additions of at least 6GW.

The change was caused by the introduction in early 2017 by the central government of reverse auctions for wind energy in place of the earlier state-determined feed-in tariffs. As reported in October this led to prices as low as Rs 2.64 per kilowatt-hour (Rs2.64 = £0.03), lower than the feed-in tariffs and lower even than the average cost from coal-fired power stations. Although good news for the consumer it has led to considerable turmoil in the wind business. 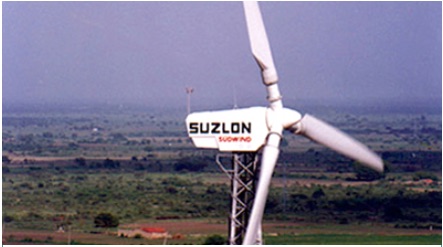 The problem is not only the lower returns but also a great deal of uncertainty. States have stopped offering power purchase agreements (PPAs) with feed-in tariffs and have in some cases threatened to re-negotiate older, higher priced agreements. On top of this there appears to be an oversupply of thermal power from coal and gas stations thanks to India’s lower than expected growth, with prices on electricity exchanges being at historically low values.

The final straw has been that States were unable to hold their own auctions because the central government had not issued guidelines for the bidding process. This, however, has recently been rectified with a set of guidelines issued on December 12.

The uncertainty has led to many projects being put on hold with a subsequent build-up of inventories. Suzlon have cut their workforce, with 1400 employees being laid off according to an article in the Indian Express in September. Certainly the half-year results to September 30 show a 20 per cent drop in employee expenses compared to the H1 for FY2016/17.

Suzlon professes to be pleased with reverse auctions in the long term, arguing that they will expand the market beyond the so-called wind states in the west and south and that they offer more certainty in the PPAs. The industry prefers the central government to state auctions because they are for large chunks of capacity, typically 250 MW per bidder, and because the government is considered a better payer than the states.

Suzlon expect growth to return to normal for FY2018/19. The government has announced that it will auction up to 10 GW in the financial year, with 4GW before the end of March. The states Tamil Nadu and Gujarat already have 500MW auctions pending