Capacity is far from the whole story

At first sight you might think that a 10 MW onshore wind farm and a 10 MW solar array would produce the same electrical power.

Far from it. In the UK, the wind farm should produce nearly three times the amount of electricity over a year. Why the big difference? It all comes down to the definition of capacity, in particular for solar photovoltaics and wind.

The capacity, also called peak power, of a solar array is the amount of electrical power produced when the array is irradiated by 1000 W per sq metre of solar energy under certain operational conditions. The capacity takes into account the efficiency of the panels in converting solar power to electrical power but ignores other losses between the array and the grid.

The latter are minor. The real problem is that the average solar irradiation in the UK is only about 110 W per sq metre (taking into account night and day, winter and summer). We should therefore expect to generate only 110/1000 = 11 percent of the advertised capacity. To check what actually happens we can look at government statistics for installed PV capacity and for the amount of electricity generated.

In 2015 the capacity, averaged from numbers at the beginning and the end of the year, was 7306 MW, while the electricity generated was 7561 GW-hr. This is equivalent to generating 7561/(365*24) = 863 MW of power continuously throughout the year – much less than the advertised capacity.

The ratio 863/7306 = 12 percent is known as the Capacity Factor and is, unsurprisingly, close to that expected from the average solar irradiation.  This factor is plotted below for the UK and Germany for the last 5 years. It is remarkably consistent and similar for both countries.  India is higher, as expected, because of the higher solar irradiation. 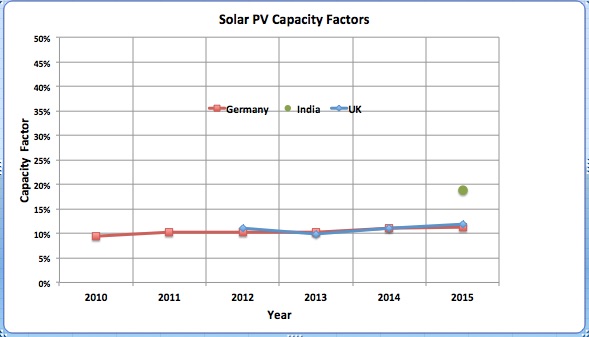 The average Capacity Factor for solar PV in UK, Germany and India from 2010.
(From gov.uk/renewables statistics E6.1, Wikipedia and Indian ministerial statement 29 July 2016. Presumably only on-grid sources are counted. Any distinction between Capacity factor and Load factor is ignored here)

The quoted capacity of a wind turbine is generally the maximum electrical power that the generator is capable of handling. This occurs at different wind speeds for different turbines, but is typically between 12 and 17 metres per second. At higher speeds the efficiency has to be reduced by, for example, adjusting the pitch of the blades.

In the same way as solar, the average annual wind speeds are much less than the rated value of 12 – 17 m/sec. In the UK, 6 m/s is considered good. However the relation between power produced and wind speed is cubic, not linear, so the computation of Capacity Factor is complicated. For example, a varying wind speed, some high some low, produces more power than a constant medium speed.

The plot below shows that the wind Capacity Factor in the UK has been near 28 percent onshore and 38 percent offshore. 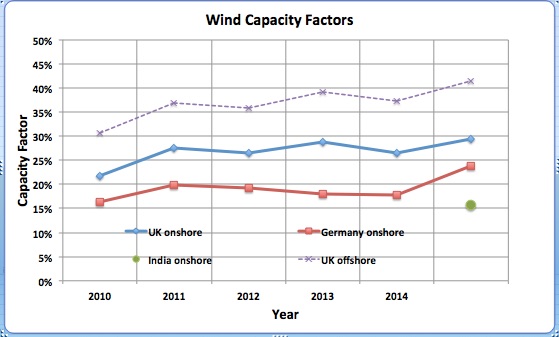 The average Capacity Factor for onshore wind in UK, Germany and India, and offshore wind in UK. India is surprisingly low, which may be due to grid problems.

Capacity is therefore not the whole truth. This can be said about all power sources, but in different ways. For example thermal plants (gas-fired or coal) do not achieve full capacity because of maintenance and repair, and because they are turned down when demand is low.  Nuclear plants cannot be turned down so easily and therefore achieve high capacity factors, near 90 percent.

The term “capacity” implies that a source is capable of providing the stated power. This is true for thermal and nuclear plants: with luck, and if you really wanted to, you could keep the plant running at full blast and achieve close to capacity for a long time. With wind and solar this is simply not possible.

Does it matter?  After all, capacity is a well-defined quantity, well understood by those in the business. The precise power you obtain will anyway vary depending on circumstances. Numbers like 863 MW and 7306 MW are just indicative, so why bother how they are defined?

The answer is that terms are important, particularly when comparing power sources. As we saw at the beginning, 10 GW of solar and 10 GW of wind capacity sound the same but give very different results. This is misleading and reduces confidence in the technology.

It would be better for the industry to define and use an effective capacity that is closer to the actual average output. Sceptical readers and opponents would then have less to gripe about.